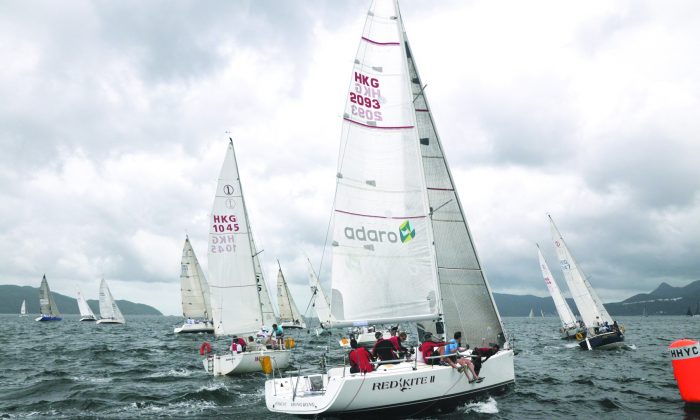 Meanwhile, Frank van Kempen in “Fly By Wire” just edged out “Merlin”, his closest rival, in the Sports Boat category by winning Race-9.

The final race of the 2013 series was held on Saturday Aug 17 taking in the tail end conditions of Typhoon Utor which swept through Hong Kong a few days before.

“Jelik” again showed her class by winning line honours in Race-9 of the IRC-A series, but having only competed three times finished in 16th place in the series.

“Mandrake” finished first in Race-9 on calculated time followed by “Signal 8” and “Ambush”. But it was “Signal 8” that took the IRC-A series title just edging out “Mandrake” by one point.

“Ambush” came third in the series and “Mojito” finished in fourth place.

“FreeFire” who was lying third with one race remaining did not compete in Race-9 as she had rigging damage and did not want to exacerbate the problem.

“Red Kite II” finished the final race in a leisurely third place to take the IRC-B Series title for the fifth time in succession in this competition.

“Vixen”, who finished in second place last year, was again lying second in the competition with one race remaining. She took line honours and won Race-9 on calculated time, but it would have required “Red Kite II” to be placed way down the order in eighth place for it to affect the series result.

“Whiskey Jack” who came fourth in Race-9 held onto third place overall ahead of “Gearbox”.

“Dexter II”’s second place finish in Race-9 was still insufficient to lift her higher than fifth place in the series.

The Impala class battle ended as expected with “Impala I”, “Taxi” and “Boss Hogg” repeating their last year’s placings of first, second and third respectively in the IRC-C Typhoon Series.

“Moll” was again pushed into fourth place with “Also Can” in fifth and “Madame K” taking sixth place in the series.

“Scintilla”, who came in first on calculated time, finished in second place in the series and “JeNa PaBe” (Ben Chong), who has had a good series, had a disappointing last race dropping him from second to third place in the overall results.

“GA” came fourth in the series, followed by “Ex-Libris”.

Sonata “Jil Jik” finished in second place in Race-9 to push her into sixth place overall much to the pleasure of Geoff Tayler, owner of Paloma, another Sonata. “It just shows what we might achieve,” he enthused.

“Bits & Pieces”, still struggling with her HKPN rating, again took line honours in Race-9, but finished the series in the middle of the 28 boat field.

Bonnie Yeung explained the background to the boats “Dea” and “Dea II”, to the Epoch Times.

“These two boats were originally used for training youngsters in sailing techniques as part of the Duke of Edinburgh award scheme. Although this scheme was disbanded in Hong Kong in 1996, just before the return of Hong Kong to China, a group of sailors have continued to use the boats to train youngsters in the skills of sailing,” said Yeung.

With “Fly By Wire” and “Merlin” both level on 12 points at the start of Race-9, it was as Steve Bourne remarked last week with it being “a match racing finish to the series” in the Sports Boat category.

Bourne, eager to get away quickly in the last race, over-cooked the start and had to make a circle to re-cross the line.

Coming down-wind to the leeward mark on the first circuit “Fly By Wire” was some 50 metres in front, but it seemed like “Merlin”, with spinnaker bulging in the fresh breeze, was making progress. But things went wrong for “Merlin” at the top windward mark.

“The wind changed direction 20 yards before the mark. We could make the mark, but then had to put in two more tacks and the wind dropped as we started to go downwind and Frank was away,” Bourne told the Epoch Times.

Frank van Kempen, in his slightly reserved manner, was pleased with his win and told the Epoch Times how conditions favoured them ahead of “Merlin”.

“It’s always great competing with Steve. He is a great competitor and he makes some good starts, but we just won the race today.

“We could win today because there was more wind, and with more wind we are stronger,” he added.

“It’s always a good place for Steve to be—one point behind us!” he observed.

Although “Catch 22” came in third in the final race she did not do quite enough to push “R2B2” out of third place in the series.