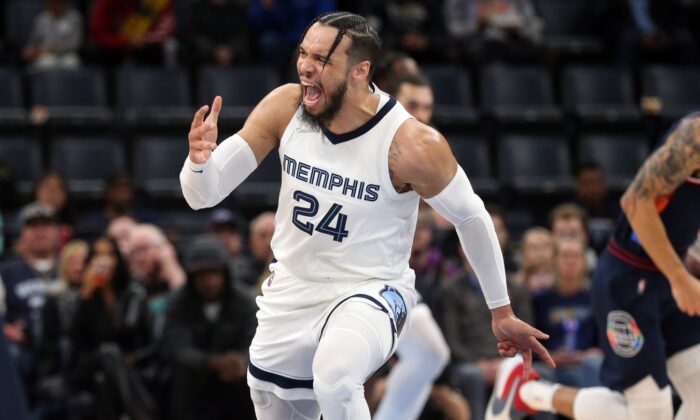 Memphis Grizzles guard Dillon Brooks (24) reacts during the first half against the Philadelphia 76ers at FedExForum. in Memphis, Tenn., on Dec. 13, 2021. (Petre Thomas/USA TODAY Sports via Field Level Media)
NBA

De’Anthony Melton contributed 15 points and Tyus Jones had 13 for the Grizzlies, who have won eight of nine. John Konchar also had 11.

The Grizzlies continued to thrive without Ja Morant, who sprained his left knee in a Nov. 26 loss to the Atlanta Hawks.

Tyrese Maxey led the Sixers with 23 points, while Charles Bassey added a career-high 13 points, 10 rebounds, and four blocked shots for his first double-double. Tobias Harris and Shake Milton scored 12 points each and Furkan Korkmaz had 10.

Jones hit a tough floater in the lane for a 55–44 Memphis lead with 5:27 remaining in the second quarter.

Matisse Thybulle responded with a 3-pointer from the wing on the Sixers’ ensuing possession.

Melton was fouled on a trey with one-tenth of a second left and he knocked down all three shots for a 68–56 Grizzlies advantage at halftime.

Brooks led the Grizzlies with 14 points at halftime.

Memphis surged ahead 82–60 with 7:48 to go in the third after Steven Adams scored in the low post.

Jackson was dominant in the middle without Embiid and soon scored for a 90–67 advantage.

With a thinner bench, the Sixers were unable to slice into the deficit, trailing 101-75 at the end of the third.

The Sixers kept misfiring from 3-point territory and the long rebounds resulted in a number of easy baskets for the Grizzlies, who moved ahead 117–81 with 5:06 left.