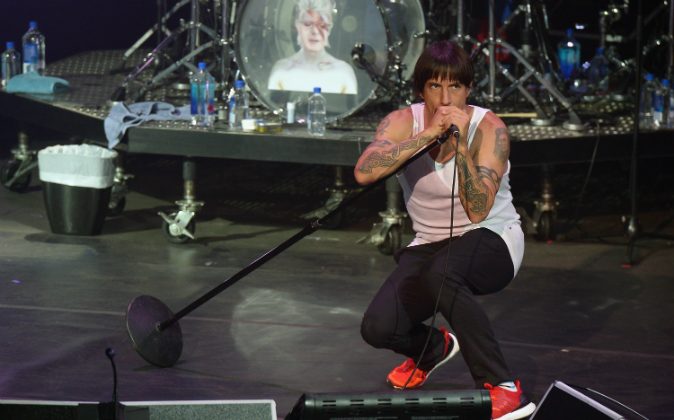 Anthony Kiedis of the Red Hot Chili Peppers provided an update on his health in an interview with Entertainment Tonight Canada.

“I had inflammation in my guts,” Kiedis told ET Canada. “That becomes an incredibly painful situation where you get a fever and pass out.”

Kiedis was hospitalized for complications from intestinal flu on Saturday (May 14) evening. The group appeared on stage at KROQ’s Weenie Roast concert but didn’t perform any of their hit songs—to the disappointment of fans, band members, and Kiedis.

“It was a painful and sad thing to have to cancel shows, we don’t really do that,” he said. “I’d rather play deathly ill than not at all but in this particular instance I was starting to go down to the ground.”

The group canceled an appearance at a California radio station’s annual concert on May 14 and a concert for iHeart Radio on May 17th.

Though his hospitalization was a derailment for scheduled shows, the 53-year-old singer views his recent health scare as a wake-up call.

“I think I had to get sick to take a look at myself and get to the causes and conditions of my overall health. So it turned out to be a good thing, albeit painful,” Kiedis said.

“I push pretty hard sometimes and I do take my health for granted on a certain level because I feel strong and capable.  I surf most days and I like to charge, but every now and then, the body is like ‘you’re doing something wrong, either fix it or we’re gonna let you know about it’, and I think that my body let me know that I had to change my ways a little bit.”

Kiedis assured fans he is on the “mend” and was quite surprised about all the media attention surrounding his hospitalization.

“I think it was a slow news day,” he said. “When I opened my phone and saw I was in the news, I was like ‘Everything must be okay in the world today if that’s what’s making the news.”

The Chilis are scheduled to return to the stage on May 29 at Ohio’s Rock on the Range fest.