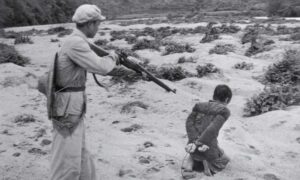 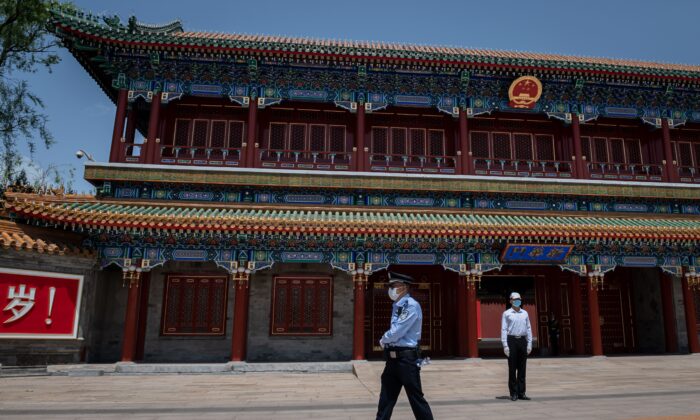 A security guard (right) and a police officer (left) secure the area at the entrance to the Zhongnanhai leadership compound in Beijing on May 18, 2020. (Nicolas Asfouri/AFP via Getty Images)
Thinking About China

Red Guard Logic in the Madness of Beijing’s Retreat

The “Red Guard logic” behind the deliberate destruction by the Chinese Communist Party (CCP) of much of mainland China’s market economy may be the only thing which allows the Party to remain in control of the People’s Republic of China (PRC).

CCP leader Xi Jinping is going into a “controlled burn” of the private sector to stop the now-inevitable wildfire collapse of the PRC economy from sweeping away the CCP itself. It is reminiscent of the Cultural Revolution instigated by Mao Zedong in 1966, ceasing only with his death in 1976.

None of this is coincidence.

The Cultural Revolution was a civil war within the CCP, but with the Chinese public as the sacrificial pawns. Another civil war is already underway within the CCP as Xi and his ultra-Maoists fight to retain control.

The re-emergence of the now-gentrified Red Guard elements of the CCP are driving what, for the ultra-Maoists, is realpolitik: the key to managing the PRC’s decline in such a way that the Party remains in control. The lives and welfare of the Chinese public are not the issue; they are irrelevant to the CCP, and so is wealth. The Party is the only concern.

Western investors have been shocked by the deliberate acts of the CCP to slash trillions of dollars from the value of publicly-traded Chinese corporations, many of them havens for U.S. pension fund investments. The acts defy Western logic, which places a premium on transactional wealth building. Most U.S. and Western leaders have, since President Jimmy Carter (1977–81)—but particularly President Bill Clinton (1993–2001)—staked the security of their countries on the belief that Maoism was dead and that Beijing had embarked on a market economy “convergence” with the West.

Indeed, Deng Xiaoping’s post-Mao flirtation with private sector freedoms clearly led, in the minds of the ultra-Maoists, to China’s present dilemma. And that dilemma is that the demands of the population for urban, wealthy lifestyles served only to weaken CCP control over the population, and to accelerate demands for food and water to the point that economic collapse is imminent. Overwhelming foreign food dependence continues into the foreseeable future.

Xi feels he has to shepherd mainland China back to poverty without losing control of the country. And this means closing down the borders, once again, although with openings to trading partners on the Eurasian continent to provide some of the needed foodstuffs and oil.

But first Xi must ensure that he can secure a third five-year term as Party leader at the October 2022 CCP Congress. A third term would have been unprecedented, but possible, given Xi’s strenuous development of a Mao-style personality cult of obedience. The collapse of the United States in Afghanistan in August 2021 bolstered Xi’s position because it showed that he could “see off” U.S. competition.

Ensuring the votes at the Party Congress more than a year hence began with the early-August (pre-Kabul) secretive annual CCP leadership retreat in the beachside resort of Beidaihe, in Hebei Province. What seemed to have happened was that Xi consolidated his position, and that the ideological battle within the CCP—ultra-Maoists against liberals—is being resolved in favor of keeping the Party alive.

One apparent outcome of Beidaihe was that Politburo Standing Committee member (one of five), Wang Yang, 66, moved up from number five to number three. He is also Chairman of the National Committee of the Chinese People’s Political Consultative Conference. Significantly, this formerly pro-reform Party leader has recently become solidly pro-Xi Jinping; that is: hard line. But Wang is seen as too old to replace Xi, so something else is afoot.

The next phase is to position a more-or-less unified CCP—happily or unhappily allowing Xi to have his third term—to face the populace as the Party starts to remove critics and to force submission to a tightening economy under greater authoritarianism. This could take on the unstable aspects of the decade-long Cultural Revolution.

This should not seem such a remote possibility. Look how quickly many Western states, including such laissez-faire societies as Australia and New Zealand, have moved to draconian lockdowns of populations, with the start of major public pushback. It could more easily happen in China as urban pressures confront enforced economic collapse.

The late Australian statesman, Sir Charles Court, who gave Australia its post-World War II resources boom, noted: “Every boom ends with a bust.” The West’s—and China’s—booms this time have lasted far longer than the normal cycle.

But as the Chinese economy collapses, as it is already doing, the follow-on impact for its major trading partners will be profound. Australia and Brazil, for example, will be forced to undertake radical actions to re-stimulate their economies. But can they?

Gregory Copley
Follow
Gregory Copley is president of the International Strategic Studies Association based in Washington. Born in Australia, Copley is a Member of the Order of Australia, entrepreneur, writer, government adviser, and defense publication editor. His latest book is The New Total War of the 21st Century and the Trigger of the Fear Pandemic.
TOP NEWS