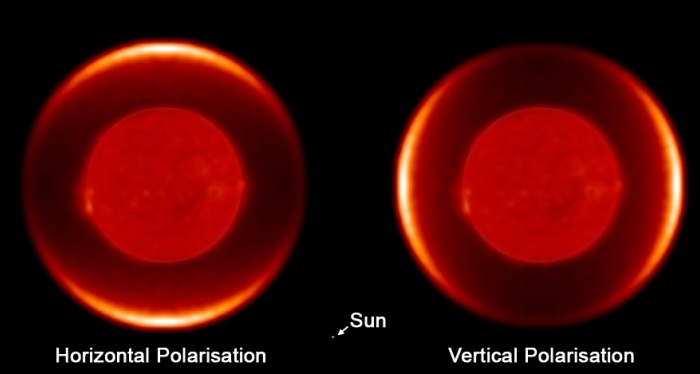 A synthetic image produced from the data of the dust shell around the red giant star W Hydrae, shown in two polarizations of light, horizontal and vertical. This is equivalent to viewing the dust shell through polarized sunglasses, with the glasses held horizontally (left image) and vertically (right image). The image of the star in the centre of the dust shell is not from these observations and is for illustrative purposes. The sun (a single dot) is included for scale. (Barnaby Norris)
Science

As faraway stars die, they generate massive solar winds that eject up to half the star’s mass into space, where it becomes accessible for building Earth-like planets.

Such stars are called red giants and their death throes create these superwinds that last 10,000 years and are 100 million times stronger than the wind from our sun.

Until now, superwinds were thought to be driven by tiny dust grains or silicates in a dying star’s halo that are pushed away by starlight. However, based on this theory, dust grains would overheat and evaporate.

They found that silicate grains can reach unexpectedly large sizes of 300 nanometers (1 nanometer is one-billionth of a meter), giving them much stronger reflective abilities. Hence they act like mirrors, staying cool despite the star’s intense radiation, and can be pushed out without disintegrating.

The scientists believe these large wind-driving grains are accelerated by scattered, not absorbed, light, traveling at the speed of a rocket—20,000 miles per hour (10 km per second). Although they are tiny in comparison to sand grains, a superwind is similar in effect to a sandstorm.

This discovery is a breakthrough in our understanding of superwinds and how sun-like stars die, said Albert Zijlstra at the U.K.’s University of Manchester in a press release.

“The dust and sand in the superwind will survive the star, and later become part of the clouds in space from which new stars form,” he explained. “The sand grains at that time become the building blocks of planets.”

“Our own Earth has formed from star dust,” Zijlstra said. “We are now a big step further in understanding this cycle of life and death.”

The research by Norris et al is discussed in a letter to Nature published on April 11, and also an accompanying News and Views article by Susanne Höfner at Sweden’s Uppsala University.