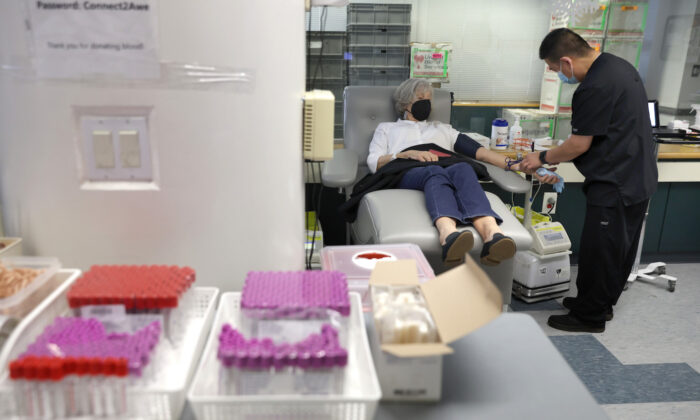 The United States is in a “dire” blood supply crisis and patients are suffering, so declared the American Red Cross (ARC) in an appeal to the nation for more blood donations.

ARC’s Jan. 11 statement said the “worst blood shortage in over a decade” is posing a “concerning risk to patient care.”

“Amid the crisis, doctors have been forced to make difficult decisions about who receives blood transfusions and who will have to wait,” it said.

The American Red Cross, which provides 40 percent of the nation’s blood supply, reports that some hospitals are getting one-fourth of the blood needed.

According to the ARC, out-patients forced to wait two or three days for the right blood type are seeing their conditions deteriorate to the point that they require hospitalization due to the delay, further straining hospital systems already inundated with patients.

In a mid-December joint statement, a coalition of America’s leading blood suppliers warned: “Blood centers across the country are reporting less than a one-day supply of blood—a dangerously low level…[which means]…life-saving blood may not be available for some patients.”

“Some hospitals have already been forced to alter treatment for some patients or cancel some patient surgeries due to blood supply challenges,” the coalition said.

Spokesperson Nick Gehrig of Vitalant, a non-profit blood supplier servicing 900 hospitals across 28 states, told The Epoch Times, “Patients rely on donated blood every day, which can take up to a few days to be tested and processed. More donors are needed in the coming days…to ensure there is enough blood on the shelves to address emergency and routine patient needs.”

In a statement released on Jan. 10, Vitalant, in operation since 1943, called the present shortage “historic.” It reported that December blood donations fell far short of the need and that the trend has continued into January.

Vitalant’s website states that its type O blood supply is at less than half of the desired four-day inventory levels, and the organization finds it “worrisome” that its usual donor appointment slots are not filling up.

Type O is the most transfused blood type, and along with type O-negative, is the most needed, though all types are in short supply.

The ARC and Vitalant attribute the current blood shortage to many potential donors coming down with regular seasonal ailments, travel, winter weather, and the effects of the pandemic.

The pandemic complications they cited include people working remotely, limits on the number of people who can gather in one place, blood drive cancellations, and public misunderstanding of donation eligibility.

The shortage of blood donors has been aggravated by the Delta and Omicron variants of the coronavirus, say the blood suppliers.

Blood donations from qualified donors, vaccinated or unvaccinated, are welcomed by both the American Red Cross and Vitalant.

Only three percent of Americans give blood.