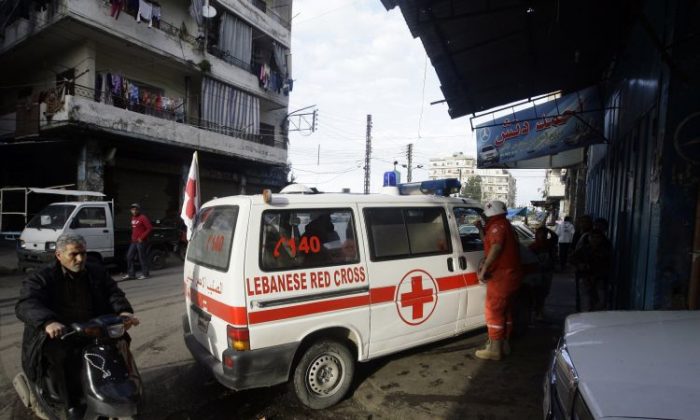 Red Cross volunteers arrive to evacuate wounded people in the Sunni neighbourhood of Bab al-Tabbaneh, on Feb. 11,  2012. The Red Cross on Sunday said that it still cannot get into the Homs neighborhood of Baba Amr, which has been under attack by the Syrian army. (Joseph Eid/AFP/Getty Images)
Middle East

The Red Cross on Sunday said that it has still not been able to access the Homs neighborhood of Baba Amr, which has been under heavy assault by the Syrian army for weeks. The aid agency said it distributed food and supplies to people who fled the neighborhood, reported the BBC.

Last Thursday, Syrian authorities had agreed to allow a joint team of the Red Cross and the Syrian Arab Red Crescent Society into Baba Amr, but so far it has not materialized.

The Red Cross has been asking for at least a daily two-hour ceasefire during which to delivery emergency aid.

Syrian army officials told the Red Cross that Baba Amr was booby trapped. However, local activists said that Syrian security forces were launching attacks in the neighborhood, according to the broadcaster.

Activists and journalists who were on the ground in the neighborhood have described the situation as a humanitarian disaster, with no power or telecommunications and suffering from rampant food and medical supply shortages.

Other activists reported that the army began shelling other areas in Homs as well over the weekend. “Several injuries have been recorded when a nail-bomb” exploded in the Bayada, the Local Coordination Committees said. There was also the “sound of a strong explosion” in Al-Marah, which was punctuated with “sporadic shooting,” it added.

Abu Hassan al-Homsi, a doctor in a clinic in the Homs district of Khaldiyeh, said he treated several wounded people. “This has become routine, the mortars start falling early in the morning,” he told Al-Jazeera.

Another activist said that water and fuel have been cut off in the district where the temperatures are freezing. “We are collecting rain and snow water, and cutting trees to burn to warm ourselves,” the activist told the television station.