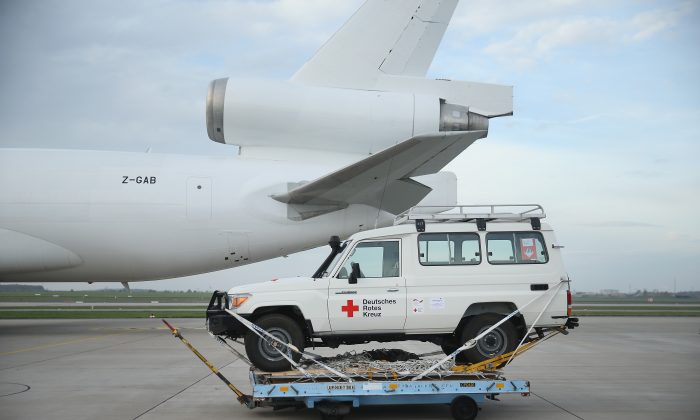 A 4X4 jeep of the German Red Cross (DRK), part of a 25-ton shipment of tents, generators, air-conditioning units, chlorine for disinfection and other supplies destined for Ebola treatment centers in Sierra Leone, stands on the tarmac shortly before ground crews loaded it onto a plane at Schoenefeld Airport on November 4, 2014 in Schoenefeld, Germany. (Sean Gallup/Getty Images)
International

The Panama Papers show that Mossack Fonseca used the name of the Red Cross and other charity agencies routinely to hide the real beneficiaries of millions of dollars in offshore funds, said two newspapers on April 10.

It is not believed that the charitable organizations had any knowledge that their names were being falsely used to obscure the funds.

According to Panama law, the beneficiaries of a foundation can be used without knowing it.
— Panama papers

Newspapers Le Monde of France and Le Matin Dimanche from Switzerland said the law firm created dummy foundations with names like “Faith Foundation” to hold shares in about 500 offshore companies. The “Red Cross,” was continuously used as the foundation’s beneficiary, which would help hide the firm’s true beneficiaries and coating them in an “NGO aura,” wrote the papers.

“Given that banks and financial institutions are today asked to obtain information about economic beneficiaries, it has become difficult for us not to divulge the identity of those of the Faith Foundation’s,” the email said.

Another email suggests the Red Cross did not know that their name was being falsely used.

“According to Panama law, the beneficiaries of a foundation can be used without knowing it,” the email said.

“That means the International Red Cross doesn’t know about this arrangement,” it continued.

A spokeswoman for the International Committee of the Red Cross (ICRC), Claire Kaplun, said the revelation was “a total surprise and something we find extremely shocking.”

The Red Cross was enraged at the revelation of their name being used. Kaplun said that using the organization’s name or logo without permission is not allowed by international law—furthermore, doing so can put staff members at risk.

We work in conflict zones. We work without weapons. Our protection is our name, our emblem.
— Claire Kaplun, Red Cross

“We work in conflict zones. We work without weapons. Our protection is our name, our emblem, the faith that people have in our reputation,” said Kaplun.

“Let’s say this money was linked to a warring party in a conflict. Imagine what consequences that could have,” she added.

“The ICRC needs particular protection, because we work in war zones and in conflicts with many belligerents,” said Peter Maurer, president of the ICRC to AFP.

“The security of our staff is in part guaranteed because our name and our emblem are respected,” he added.

Both newspapers that revealed the NGO’s name had been falsely used said the Faith Foundation traced back to former Argentine President Nestor Kirchner and his wife, Cristina Fernandez de Kirchner, who succeeded him in 2007.

The foundation was also linked to  a complex London real estate transaction involving an Emirati leader.

According to Le Matin Dimanche, the name of the World Wildlife Fund (WWF) also appeared to have been falsely used by the law firm.