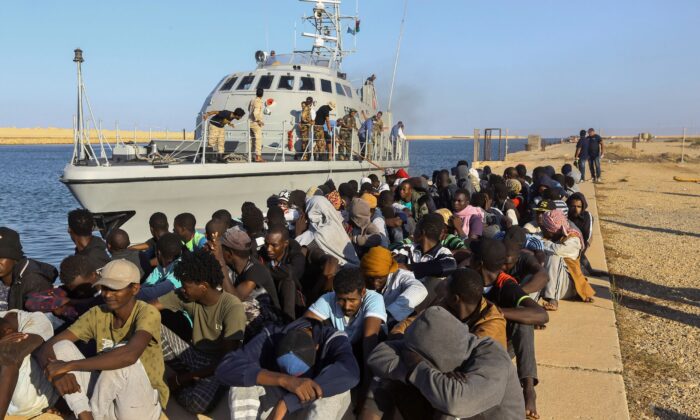 In this photo, rescued migrants looking to use the restive North African country as way to get to Europe, are seated next to a coast guard boat in the city of Khoms, Libya, on Oct. 1, 2019. (Hazem Ahmed/AP Photo)
Africa

They were found Tuesday near the western Libyan town of Zawiya, the Red Crescent’s branch in the town said. The bodies were handed over to authorities for burial, it said.

The migrants likely drowned. The U.N. migration agency says more than 1,100 migrants were reported dead or presumed dead in numerous boat mishaps and shipwrecks off Libya so far this year.

The Red Crescent posted images purporting to show its workers carrying white body bags with the Mediterranean Sea in the background.

Libya was plunged into turmoil by the NATO-backed 2011 uprising that toppled and killed longtime dictator Moammar Gadhafi. The North African nation has since emerged as a popular, if extremely dangerous, route to Europe for those fleeing poverty and civil war in Africa and the Middle East.

Oil-rich Libya is largely governed by local militias, many of which profit from the trafficking. Rights groups say migrants traversing Libya have been tortured, raped, and subjected to forced labor at the hands of traffickers and inside official detention centers.

U.N.-commissioned investigators found that the practice of arbitrary disappearances and violence against migrants inside Libyan prisons could amount to crimes against humanity.