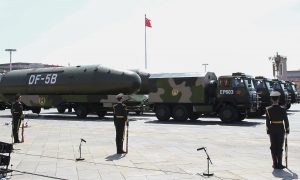 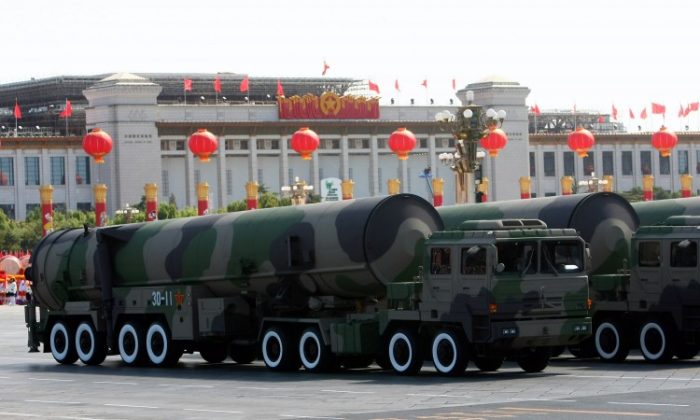 Nuclear-capable missiles are displayed at a massive parade to celebrate the 60th anniversary of the founding of the Chinese communist regime in Beijing, on Oct. 1, 2009. (Feng Li/Getty Images)
Thinking About China

Before there were “weapons of mass destruction” (WMD), there were nuclear-biological-chemical (NBC) weapons. NBC warfare has been a Cold War euphemism for decades, but disarmament advocates prefer WMD because the phrase is more frightening and easier understood by the average person.

The militaries in NATO and the United States have written voluminous doctrines, tactics, techniques, and procedures on the conduct of NBC warfare. Such examples include “Allied Joint Doctrine for NBC” (pdf); “Chemical, Biological, Radiological, and Nuclear Response” (pdf); “Combat Skills of the Soldier” (chapter 5, pdf); and “Naval Warfare Publication.” These and other related military publications are accessible online, and potential adversaries such as China’s People’s Liberation Army (PLA) have been studying and wargaming them for years. Other than simple prudence, there is a specific reason for PLA interest in studying Western NBC (or WMD) doctrine: Red China has embarked on a multi-pronged campaign involving NBC warfare that is finally coming into focus.

The Chinese Communists (ChiComs) are pursuing world domination in the economic and military spheres as they seek to return China to its historical prominence as a world leader. After all, China was once the most advanced civilization in the ancient world. As noted here, “China was once the standard-setter in an advanced civilization, the center point on which the economies and cultures of much of the Earth revolved.” Since the Chinese Communist Party (CCP) gained control of mainland China in 1949, the ChiComs have embarked on a methodical plan to resume Chinese supremacy in all human endeavors. This effort involves displacing U.S. supremacy and the post-World War II-era international system with “Chinese methods,” systems, and institutions.

The United States is the “main adversary” as far as the ChiComs and PLA are concerned. Beijing’s plan has now moved from playing “economic catch-up” via exploitation of the existing international system to overt actions directed against the United States and its allies.

Two elements of NBC warfare have already been employed against the United States: chemical and biological. The third apex of the NBC triangle—nuclear intimidation and coercion—is well along the way to becoming reality.

The first element of the ChiComs’ NBC warfare campaign has been underway for years. There is enormous manufacture of fentanyl (by the tons) and other synthetic narcotics in China. As noted here, “China produces nearly all of the fentanyl, fentanyl analogues, and fentanyl precursors in the world.” Fentanyl and other synthetic and addictive drugs are the chemical part of multi-prong Chinese approach to achieving world dominance.

What better way to destroy the United States from within than through drug addiction and the hopelessness that addiction engenders? Note the continuing rise in drug overdose deaths in the United States in the below graphic from the CDC. Nearly half of those deaths are from fentanyl, and the year-to-year fentanyl deaths continue to increase dramatically as noted here.

SARS-CoV-2 (the virus that causes COVID-19) is nothing short of a biological attack on the United States and the rest of the world. The virus was lab-developed or lab-modified. Scientists suggest that the CGG-CGG amino acid sequence found in the ChiCom virus is manmade and can only have been inserted through gain-of-function research, as reported in The Wall Street Journal, as the CGG-CGG sequence is not found in nature. Additionally, British Professor Angus Dalgleish and Norwegian scientist Dr. Birger Sørensen completed a study that “claims that Chinese scientists created COVID-19 in a Wuhan lab,” and that they had evidence in hand of Chinese “retro-engineering” for over a year.

The zoonotic origins theory promoted by the ChiComs over the last 20 months is no longer operative. The ChiComs have obfuscated its origins and denied access to complete records of the virus while continually fear-mongering and exaggerating its effects via their state-run media, as well as promoting authoritarian methods (unproven and unscientific) for controlling the virus.

A biological war is underway that is being exploited to the hilt by Beijing, and the results have probably exceeded its wildest dreams, including the continuing turbulence in the U.S. economy, the virtual paralyzing of the world economy, and also the ongoing attacks on Americans’ constitutionally-guaranteed liberties by lockdown advocates.

According to Admiral Charles Richard, Commander of U.S. Strategic Command (STRATCOM), Red China is pursuing an unprecedented “nuclear breakout” through the accelerated production and deployment of nuclear missiles, warheads, and nuclear command and control infrastructure.

And the ChiComs also have an air-launched ICBM under development that will complete their nuclear triad along with their strategic submarine force. So much for Beijing’s professed “minimum nuclear deterrent” strategy.

The coming ChiCom nuclear intimidation and coercion will complete the NBC warfare triangular arrowhead aimed squarely at the United States. The ChiComs are positioning themselves to “win without fighting” a kinetic military war through their strategic three-pronged NBC weapons attack. Sun Tzu would be proud.