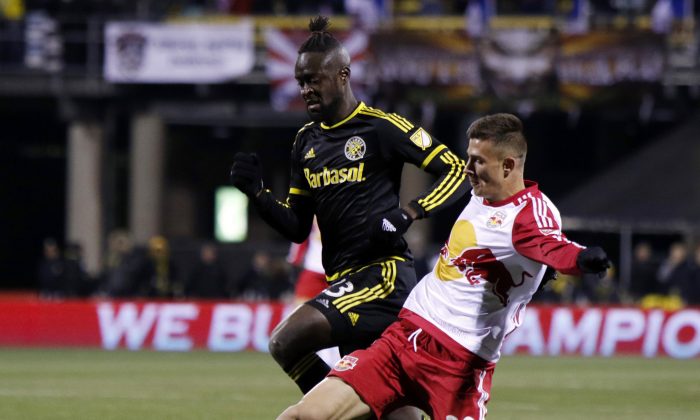 “I’m still living at home,” the New York Red Bulls defender said, “so if my mom says I need to help with dishes, I’ve got to do it. I’m in charge of the garbage. I have to take out the garbage every Wednesday and Saturday.”

Just 20 years old and an imposing 6-foot-3, Miazga made his debut for the U.S. national team this month. He will start at center back Sunday when the Red Bulls try to overturn a 2-0 deficit against visiting Columbus in the second leg of Major League Soccer’s Eastern Conference final.

Miazga is part of a shift in American player development. He not only skipped college, giving up a scholarship from Michigan, he bypassed his final season of soccer at Clifton High School to join the Red Bulls Academy. While his buddies were playing big matches against rival schools such as Passaic Tech and Wayne Valley, he was receiving frequent training sessions with elite coaches.

“MLS teams are spending a lot more money on development and investments in those academies, so it’s a natural alternative for some players,” U.S. Soccer Federation President Sunil Gulati said.

The U.S. has never won the World Cup and hasn’t reached the semifinals since the initial tournament in 1930. Miazga is part of a group of young players coach Jurgen Klinsmann hopes will reinvigorate the national team ahead of the 2018 World Cup.

“We need some new faces, some young players to come in and start to really show what they’re all about,” captain Michael Bradley said.

As they try to catch up with the powers of Europe and South America, the USSF and MLS have started to emulate the pyramid structure developed by many clubs on those continents. The Red Bulls run youth teams for boys under 12, 13, 14, 16 and 18 — totaling about 110 players — plus an under-23 side in the Premier Development League and Red Bulls II, a reserve team in the third-tier United Soccer League.

Miazga was 13 when he attended a mass tryout for the Red Bulls Academy in 2008, earning a spot among the 23 chosen for the 2009 under-14 team. The cost-free academy guarantees at least three training sessions a week and no more than two games.

“If you look at around the world, players are developed in academies and there is a lot of investment behind it in order to move them into a professional environment,” said Red Bulls Academy director Bob Montgomery, who joined the team in 2007 after 29 seasons as Adelphi’s coach.

“One of the things that people tend to forget, we’ve only been doing it — compared to a lot of other nations — for a short period of time,” Montgomery said. “It doesn’t happen overnight just because you read a book.”

A son of Polish immigrants who met in the United States, Miazga was obsessed with soccer at a young age. He advanced in the Red Bulls system, playing for the U-16s national championship team in 2011-12. In 2012, U-16 coach Rob Elliott told Miazga he was going to train with the senior team.

Miazga got into some reserve league games that year, signed a professional contract in May 2013 and made his MLS debut that Sept. 8 as a 76th-minute substitute at Houston. He appeared in seven league matches last year and made two blunders: he missed a clearance against Columbus that led to a goal and caused Henry to snarl at him, then received a red card versus New England for a clumsy, late slide tackle.

He entered this season’s opener at Kansas City late in the second half when former Wolverhampton and Marseille defender Ronald Zubar injured a hamstring during his Red Bulls debut. Seizing the opportunity, Miazga started 24 of 34 regular-season games. He progressed simultaneously with the U.S. national team program, starting four games at this year’s Under-20 World Cup in New Zealand, where the Americans lost to Serbia on penalty kicks in the quarterfinals, then four more for the Under-23 team last month in Olympic qualifying.

“He actually was thrust into a situation that maybe we weren’t ready to put him in and maybe we didn’t think he was ready for,” Red Bulls coach Jesse Marsch said. “It wasn’t that it was a finished product at the start, and it’s still not a finished product, but he showed that he was brave and fearless and ready for the moment and we’ve seen him grow so much through this season.”

Miazga even scored his first professional goal, connecting on a header against New York City FC at Yankee Stadium on June 28 and then pantomiming a home run swing during his celebration. As Miazga’s stature grew, some American fans wondered whether he would choose to play for Poland’s national team rather than the U.S., but Miazga became cap-tied under FIFA’s rules when he entered the Nov. 13 World Cup qualifier against St. Vincent and the Grenadines in the 64th minute.

As for whether his club future will be with the Red Bulls or in Europe, Miazga said that will sort itself out. His base salary of $68,250 is likely to increase by several multiples no matter where he plays.

Portland coach Caleb Porter, who coached Akron to the 2010 NCAA title, said Miazga’s path is the example many talented Americans will follow. High-level college soccer will be for late bloomers.

“The top players will now go directly into first teams or the second-tier reserve teams,” he said. “That’s just normal around the world and that’s what will happen.”

Faster and greater improvement at a younger age is needed. When Gulati attended Nigeria’s win over Mali in the Under-17 World Cup final this month, he concluded “the gap there was quite evident.”

“A noticeable difference from the level we had played at in that tournament and what was going on in the game,” he said.

While soccer leaders think big picture, Miazga is happy to make the 25-minute drive most days from his home in Clifton to the Red Bulls Training Facility, a three-field complex that opened two years ago under the final approach to Morristown Airport. When he gets home, mom can cook his favorite meal — a lean flank steak with potatoes and cucumber salad.

And when he gets to the Red Bulls, he still has chores to perform.