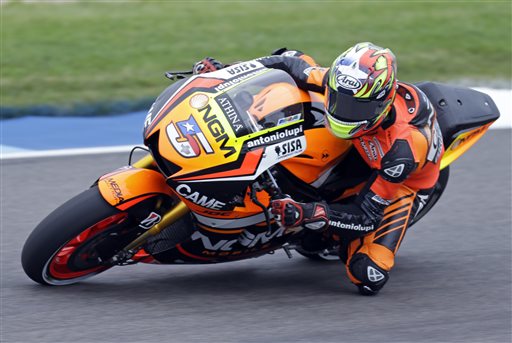 The Red Bull Indianapolis Grand Prix events kicked off on Friday and are set to continue over the weekend leading into the actual race.

There will be several practice runs on Saturday before the qualifying, which starts at 2:10 p.m.

Saturday will also feature the Colin Edwards Farewell Celebration, from 5:15 p.m. through 5:45 p.m. EDT at the Moto Midway Stage.

On Sunday, gates open at 7 a.m.  with warm up at 9:40 a.m. The lesser races, including the Moto3 Race, will lead into the Red Bull Indianapolis Grand Prix.

Live streaming will be available via Fox Sports Go.

INDIANAPOLIS—Colin Edwards is the old man of MotoGP racing.

The 40-year-old Texan is still as beloved as any motorcycle rider in America.

This weekend, Edwards and his NGM Forward Racing team will host a farewell celebration as Edwards’ prepares for the final race in his home country, the Indianapolis Grand Prix.

“I’ve been racing, I don’t know, 23 years, and I’ve not had a lot of races in the U.S., so this being the last one is special,” Edwards said after a Friday practice session. “The farewell part of it, everyone’s gotten behind, so it’s a good feeling.”

Edwards has seen a lot during his years — an American win a world championship, other competitors suffer serious or fatal injuries, even a rider nearly half his age dominate the series for two straight seasons. But after 11 years and 12 podium finishes in MotoGP, it looks like Edwards will retire at the end of the season without ever winning a race, a streak that is not likely to end this weekend.

Qualifications are schedule for Saturday. The race is set for Sunday.

Edwards returns to Indy sitting 18th in points, with a season-best finish of ninth in the season opener and having missed the top 10 in eight straight races. On Friday, his fastest practice lap of 1 minute, 34.994 seconds was 16th.

But being a longshot Sunday hasn’t dissuaded Edwards from pursuing his own American dream, winning a race at one of the world’s most prestigious venues, the Brickyard, in what will presumably be his seventh and final U.S. start.

“It would be great to win any U.S. GP because it’s a home race, it’s in front of your country folk,” the Yamaha rider said. “They’ll cheer you on, and it would be awesome.”

Here are five more things to watch this weekend at Indianapolis:

MARC’S MARCH: Spain’s Marc Marquez is chasing history again. A year after becoming the youngest MotoGP rider to win a world title, Marquez’s encore has been nothing short of sensational. He’s started in the top three of all nine races, won seven poles and, incredibly, all nine races. On Friday, he also posted the fastest practice lap, 1:32.882, making him the favorite to win a second straight Indy pole. If the 21-year-old Repsol Honda rider wins again this weekend, he would be the first back-to-back winner at Indy in MotoGP, too.

THE CHALLENGER: Who is the most likely challenger to Marquez? Perhaps Dani Pedrosa, the only two-time Indy winner and Marquez’s teammate. Pedrosa was fantastic on the old race course, claiming two poles, winning the race in 2010 and 2012 and finishing as the runner-up in 2011 and 2013. The only two-time winner of this race also was fifth on the speed chart Friday with a fast lap of 1:33.493.

DIFFERENT TRACK: For the first six years of this event, riders routinely complained about the racing surface. Now that the course has been repaved and reconfigured, those complaints have vanished. Spain’s Pol Esparago, who is sixth in the points with Monster Yamaha Tech 3, noted that the surface is smoother and it’s easier to go through the corners. Edwards called the new surface “perfection.” And despite some brief rain Friday, Esparago said the track dried faster, too.

RECORD DAY, TWICE: Spain’s Alvaro Bautista broke two records Friday. In the morning practice session, he shattered Pedrosa’s previous best in the speed trap (209.2 mph) with a speed of 211.8 mph. In the afternoon, he did it again, going 212.8 mph through the trap. He still finished 14th on the speed chart at 1:34.054.

THE UNDERCARD: Two teenagers headline this weekend’s undercard. Seventeen-year-old Ana Carrasco of Spain will attempt to qualify for Sunday’s MotoGP3 race, and 17-year-old Indiana resident Hayden Schultz is scheduled to compete in the Harley-Davidson Series. Carrasco and Shelina Moreda, of California, are the only women competing this weekend. Moreda is Shcultz’s teammate with Chili Pepper Racing.