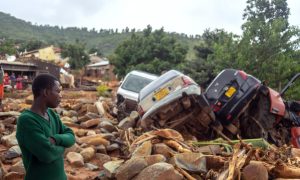 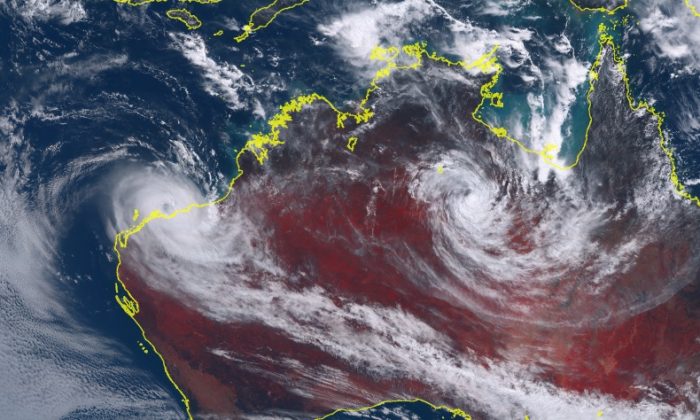 Residents in the Pilbara region in Western Australia are bracing for cyclone Veronica as it starts lashing the coast.

A powerful, slow-moving cyclone is bearing down on the coast, bringing destructive wind gusts, flooding rain, and dangerous tide surges over a prolonged period.

Cyclone Veronica was downgraded to a category 3 system as it began lashing the coastline of the Pilbara region between Dampier and Port Hedland about 6 a.m. on Sunday, March 24.

The Bureau of Meteorology (BOM) said a severe coastal impact is expected as early as mid-morning, but more likely during the afternoon.

Authorities in the Pilbara have issued a red alert, telling residents between Pardoo and Mardie to take shelter immediately and brace for howling winds and rising tides.

“Communities in the path of the cyclone should prepare to shelter from the destructive winds for an extended period today,” BOM said on Sunday morning.

Severe Tropical Cyclone Veronica is causing DESTRUCTIVE winds and increasing heavy rainfall along the central Pilbara coast between Dampier and Port Hedland. Port Hedland has registered 179mm of rainfall in the past 24 hours. #CycloneVeronica https://t.co/B1MVXBYXhh. pic.twitter.com/awyi0l70bM

“Very destructive winds with gusts in excess of 165 kilometres per hour are expected near the cyclone centre as it approaches the coast.

“Tides are likely to rise significantly above the normal high tide mark with damaging waves and very dangerous coastal inundation, particularly to the east of the cyclone centre.”

The weather bureau said heavy rainfall “conducive to major flooding” is likely over the Pilbara coast and nearby inland areas throughout Sunday and into Monday.

Residents have been urged to stay indoors in the strongest and safest part of their homes.

Port Hedland Mayor Camilo Blanco said on Saturday afternoon that residents should evacuate or “bunker down” before the cyclone tears along the northwest coast.

“It’s very important for the public in Port Hedland to understand how dangerous this is,” Blanco said in a video shared to the town’s Facebook page.

“If your roof comes off, or potentially can come off, you need to bunker down in the strongest part of your house, normally the toilet and bathroom area.

“Use your furniture like mattresses to cover yourself … and do not venture outside.”

Bureau of Meteorology senior forecaster James Ashley said Veronica was unique because it was a slow-moving system that would bring a long period of destruction.

“We are expecting a prolonged period—12 hours or more—of destructive winds near the core of the cyclone.”

Veronica is the third tropical cyclone this season and it comes as cyclone Trevor whips through the Northern Territory.

The last category four tropical cyclone to hit the WA coast was Christine in December 2013.

Meanwhile, Cyclone Trevor has weakened into a tropical low after wreaking havoc in eastern Northern Territory as it made landfall as a Category 4 storm on March 23 with winds reaching up to 250 kilometres per hour.

A mass evacuation was called for the remote region, leaving only six people in Borroloola on Saturday morning as Trevor made landfall. They had remained in their homes against advice from the authorities, local media reported.

Ex Tropical Cyclone #Trevor is located over the Tarrabool/Sylvester Lakes region of The Tablelands NT
Forecast movement SE bringing rain through #InlandCentralQld & on toward #SEQld by late week pic.twitter.com/8JUuBDn2WF

Trevor is now moving inland toward Tennant Creek where locals are preparing for flooding and strong winds.

Ex-tropical #CycloneTrevor weakened to a tropical low at 3.30 am ACST this morning, after crossing the coast as a powerful Cat 4 system. Damaging winds & heavy rain leading to localised flooding are still possible over the next few days. Latest warnings: https://t.co/30lmNQMMcP pic.twitter.com/Jp4fYaNKJL

130 camp beds set up in gymnasium of #TennantCreek High School in preparation for #CycloneTrevor pic.twitter.com/mSbM3wfa0H