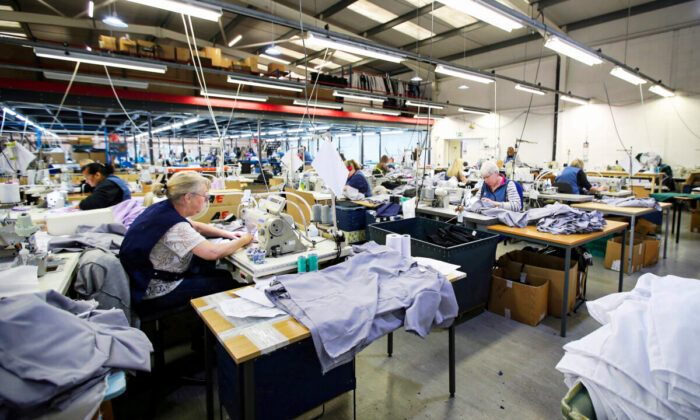 Tibard employees make uniforms for health workers at NHS at their factory in Dukinfield, Britain, on April 6, 2020. (Molly Darlington/Reuters)
UK

Recruiters Warn of Damage From ‘Extreme Skills Shortage’ in the UK

The shortage of workers could cost the UK economy £30 billion ($36 billion) every year recruiters have warned, as they ask for longer visa extensions and other measures to avoid the “economy being brought to its knees.”

Shazia Ejaz, director of campaigns at the Recruitment and Employment Confederation (REC), told The Epoch Times there was an “extreme skills shortage shortage” in the UK and that firms across the country are struggling to hire staff, risking “significant damage” to the economy.

As to why there is a shortage, Ejaz said that “we had Brexit and COVID and that meant that a number of people from Europe left and never came back.”

She added that a number of people have also left the market, such as older workers who have decided to leave because they have, for example, equity in houses. At the younger end there are those who may be staying on in education.

Ejaz said the government has many different departments working on the issue, but they need to come together. For example, the Department for Education helps with skills, the Department for Work and Pensions (DWP) tries to get people back into work, and the Home Office is responsible for immigration.

Ejaz added that “we need immigration to be more flexible to meet the demands of business such as work visas extended to five years [from the current two or three]; practical things like that.”

Organisations like Migration Watch UK argue that employers need to offer more and better skills training opportunities to UK workers and that employers easily turn to workers from abroad rather than providing training or raising the pay of those in the UK.

It pointed to a number of organisations such as the Centre for Policy Studies which made recommendations for improving technical education.

In 2018, it predicted in a report that vacancies in skilled trades would rise by 2022 owing to skills shortages.

It wrote that existing technical and vocational schools are close to collapse, noting that university technical colleges and studio schools that are meant to provide this type education for 14–19 year-olds have become “dumping grounds for children struggling in mainstream schools.” Nearly a third of those opened since 2011 have already closed.

REC projected that with a 10 percent increase in demand in the economy, and the labour market restricted by shortages, the UK economy would shrink by between 1.2 and 1.6 percent by 2027, relative to where it would be without these shortages.

“This could cost the economy anywhere between £30 billion and £39 billion every year,” wrote REC, saying that this is equivalent to losing “almost the entire current defence budget or two Elizabeth Lines annually.”

REC Chief Executive Neil Carberry said, “We haven’t had to look far for evidence that labour shortages have the power to bring segments of the UK economy to their knees recently.”

REC also called for the apprenticeship levy to be redesigned and local transport designed to support employment.

“From chaos at airports to driver shortages and NHS waiting lists growing, the underlying issue of labour shortages has burst out into the open,” he added.

“The modelling we are launching today shows the damage that could be done if we don’t solve these shortages, more than £30 billion in lost potential every year, as well as lower productivity, lower wage growth, and rising inflation,” said Carberry.

He said companies should prioritise workforce planning, invest in skills, and treat recruitment with importance.

“An approach to staffing that only focuses on cost is a highway to nowhere,” he said.

Because of a lack of skills, some workers are able to command bigger salaries owing to market forces.

“More demand makes it a candidate market,” said Ejaz. “But it’s not sustainable,” she added.

The Epoch Times has contacted the UK government for comment.