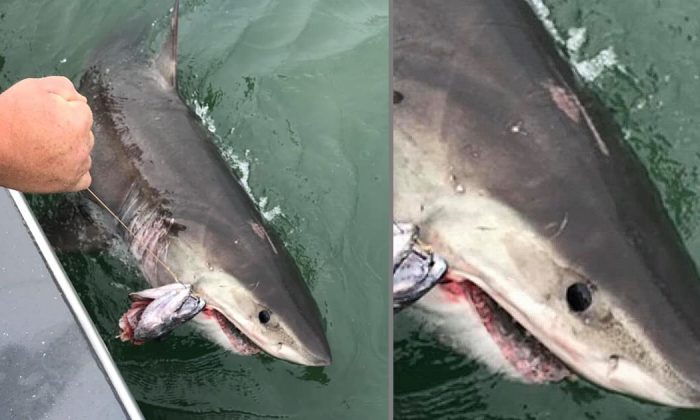 A deep-sea fisherman has shared his spine-tingling experience of capturing a giant shark off the shore of Northern California on July 13.

Golden State Sportfishing Captain Joey Gamez received the shock of his life when he led a fishing group on an expedition to Alcatraz Island, about 3 miles offshore from San Francisco Bay.

At about 10:30 a.m. local time Gamez noticed his fishing line became very heavy when the giant fish took the bait. The shark tugged the boat for about 2 miles, he was forced to pull the anchor.

“It is the first time I have had to pull an anchor for a shark,” Gamez can be heard saying on a Facebook video he live-streamed. “This is probably the biggest fish I’ve got picked about here.”

As the minutes passed, he asked others on the boat to take turns at holding the fishing rod. At first, the group thought it was a large seven-gill shark, but, after a while, it quickly became clear it was much bigger.

The shark floated sideways with a half-eaten fish in its mouth, exhausted from the battle. The men quickly realized they could not lawfully keep the shark and would have to return it to the wild.

Gamez asked his crew members to pass a knife while he held the fishing line tightly.

“Just cut the line bro,” he said while others on the boat cheered. “Bye, great white.”

Gamez joined the crew in cheering about their successful fishing expedition.

The online video attracted more than 1,000 likes and about 600 shares, with many wanting to know the type of fishing gear he used.

Reflecting on the catch afterward, he admitted the shark put up a fierce battle.

“It was a crazy fight bro,” he commented. “Thought we had a huge seven-gill on [but was wrong] … great white.”

Golden State Sportfishing congratulated Gamez and his crew for achieving a historic milestone.

“Today will go down in history for Golden State Sportfishing as one of the best days ever,” the group said on Facebook.  “Big shot [shout] out to Phenix rods and Penn reels for the best gear around, without you, landing these big fish wouldn’t have been possible.”

The group is now taking reservations for another fishing expedition for sharks, ocean salmon, halibut and striper.