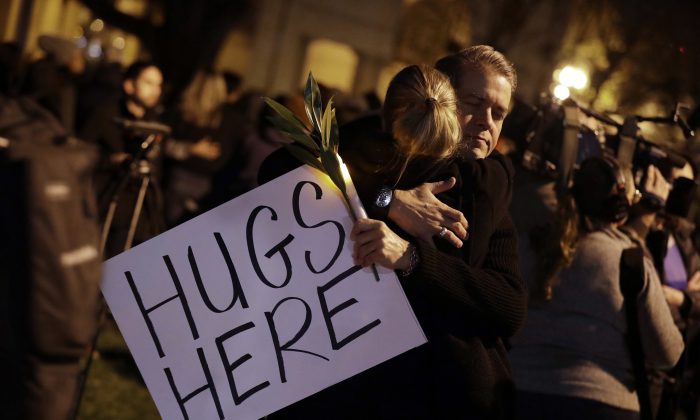 A man (facing camera) offers hugs for mourners during a vigil in memory of victims of a warehouse fire at Lake Merritt in Oakland, Calif., on 5 Dec, 2016. (AP Photo/Marcio Jose Sanchez)
US

OAKLAND, Calif. (AP)—Some people managed to text loved ones goodbye and “I love you” before they died in an Oakland warehouse fire that claimed three dozen lives, officials said, as heart-rending reports of victims’ last moments emerged from the most lethal building fire in the U.S. in more than a decade.

Also Monday, the painful and exhaustive search for those killed in the fire appeared to be coming to a close. Alameda County Sheriff Gregory Ahern told The Associated Press that he didn’t believe there would be additional bodies found.

But he cautioned that it was “impossible to be absolutely positive” about the number killed until the entire recovery effort is complete. Authorities had gone through about three-quarters of the building by Monday afternoon.

Officials said they would turn next to investigating the fire, which erupted late Friday during a dance party. It’s unclear how it started. The district attorney warned of possible murder charges as she determines whether there were any crimes linked to the blaze.

“We owe it to the community and those who perished in this fire, and those who survived the fire to be methodical, to be thorough, and to take the amount of time it takes to be able to look at every piece of potential evidence,” Alameda County District Attorney Nancy O’Malley said.

Alameda County sheriff’s spokesman Sgt. Ray Kelly said that some of the victims texted relatives, “I’m going to die,” and “I love you.”

Monday night, hundreds of people holding candles and flowers honored those who died in the fire at a vigil at Oakland’s Lake Merritt.

Those in the crowd embraced each other or held up candles as they said aloud the names of people they lost in the blaze.

Terry Ewing learned Monday what he already knew in his heart: His girlfriend, Ara Jo, was among the dead in the fire that broke out during an underground dance party at a building known as the “Ghost Ship.”

Earlier, Ewing said Jo’s friends and family had already started talking about the vibrant 29-year-old Oakland artist in the past tense, but needed confirmation. He went through photographs as he waited. Friends remembered her as someone who could fit in anywhere, he said.

“If you take her somewhere, she’ll make friends with the surly punks in the corner as well as the elderly grandparents,” he said.

The cluttered warehouse had been converted to artists’ studios and illegal living spaces, and former denizens said it was a death trap of piled wood, furniture, snaking electrical cords and only two exits.

Oakland city councilman Noel Gallo, who lives a block from the warehouse, said he confronted the property’s manager—Derick Ion Almena—several times about neighbors’ concerns about trash in the street and in front of the warehouse. Gallo said Almena essentially told authorities to “mind their own business” and appeared resistant to addressing complaints and complying with city codes.

Almena and his partner, Micah Allison, ran the building’s arts colony, called the Satya Yuga collective. Relatives, friends and former colleagues said Almena loved to surround himself with followers, but he seemed to care little for their well-being.

Almena told San Jose television station KNTV he didn’t know the event was taking place, and he wasn’t at the warehouse Friday night because he and his wife had decided to stay at a hotel because he was exhausted and their children had school.

Almena did not respond to emails or calls to phone numbers associated with him by The Associated Press. No one answered a call to a number for Allison.

The warehouse is owned by Chor N. Ng, her daughter Eva Ng told the Los Angeles Times. She said the warehouse was leased as studio space for an art collective and was not being used as a dwelling.

“We are also trying to figure out what’s going on like everybody else,” the family wrote in a statement to KNTV. “Our condolences go out to the families and friends of those injured and those who lost their lives.”

Eva Ng did not immediately return phone calls from The Associated Press.

Gallo said Chor N. Ng put Almena in charge of cleaning up the Ghost Ship, and nothing was done.

But questions persisted about whether city officials could have done more to prevent the fire. Oakland planning officials opened an investigation last month after repeated complaints about the warehouse. An inspector who went to the premises couldn’t get inside, said Darin Ranelletti of the Oakland Planning Department.

Oakland Mayor Libby Schaaf said city officials are putting together a record of what they knew about the property.

Authorities have identified 22 victims and notified their families, city officials said. An additional 11 victims have been tentatively identified, and three victims need “scientific identification,” they said.

Most of the victims’ names, including the name of a 17-year-old, were not released.

Investigators said they believe they have located the section of the building where the fire started, but the cause remains unknown.