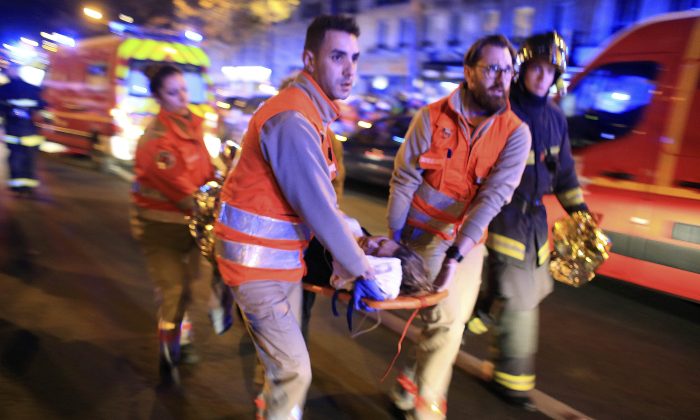 In this Nov.13, 2015 file photo, a woman is being evacuated from the Bataclan concert hall after a shooting in Paris. (AP Photo/Thibault Camus)
Europe

Recovery Just Beginning for Many of the Wounded in Paris

PARIS—One bullet tore into Amandine Andretto’s right leg, shattering her tibia. Another hit her in the arm. For three interminable hours, her parents didn’t know if she was among the dozens massacred at the Bataclan concert hall.

Finally, as rescue services rushed her to a triage and treatment center, her mother reached her on the phone.

The 32-year-old lawyer is lucky to be alive, felled by the extremists’ first sprays of gunfire in the Nov. 13 attack but saved by three officers from an elite police unit who dragged her out of the hall during the subsequent hostage-taking.

It will be at least three months before she can even begin the process of starting to walk again, her father said.

“It is going to be long,” Jean-Pierre Andretto told The Associated Press. “She has two or three more surgeries.”

Simply by staying alive, hundreds of people wounded in the Paris attacks are defying the Islamic State extremists who sought to kill them. Yet that defiance comes at an enormous price.

Some were in cardiac arrest when they were evacuated to Paris hospitals but now look like they will pull through. Scores more with no visible physical scars are haunted by what they saw or did to survive France’s worst attack in decades.

For those with smashed spines and other devastating wounds, the months and years ahead could be a daily battle. In many cases, the high-velocity rounds fired at close range and exploding suicide belts packed with shrapnel did lasting damage.

By the French health ministry’s most recent count, on Wednesday, 195 people were still hospitalized, three of them in critical condition and 41 in intensive care. More than 350 people were wounded along with the 129 killed, French officials said.

The Bataclan, where 89 died during a concert by the American band Eagles of Death Metal, was the scene of the worst carnage. There were also attacks at cafes and the national stadium.

The fact that the death toll has not been rising daily over the past week is a remarkable testimony to the French medical corps’ huge efforts to save lives.

But, like Andretto, many face more operations in the future.

One bullet at the Bataclan shattered the ankle of a pregnant woman in her thirties, ripping upward through her calf and exploding out through her knee, according to her priest in the Paris suburb of Aulnay-sous-Bois, the Rev. Tristan de Salmiech.

Her baby appears unharmed but she will need more treatment on her leg, including a skin graft.

“They think they have saved her leg, but that she will remain disabled,” de Salmiech said.

In further family trauma, her husband was shot through the stomach but “was incredibly lucky … the bullet didn’t hit any organs,” he added.

The priest would not give the couple’s names, citing privacy concerns.

An off-duty police chief from Normandy, a 38-year-old father of two with a black belt in judo, took a bullet in the back at the Bataclan that hit his spine, according to his town’s mayor, Marc-Antoine Jamet. The officer was evacuated to one of the two military hospitals in Paris that, because of their experience with battlefield wounds, took in nearly 20 percent of the most critically injured casualties.

A concert promoter has slowly been awoken from a medically induced coma after a bullet pierced one of his lungs, shattered his ribs and narrowly missed his heart, according to his father’s Facebook postings.

An amateur drummer from the town of Domont north of Paris is out of danger but still hospitalized with serious gunshot wounds, Le Parisien reported.

Those with wounds to arms, legs and joints face “very long” periods of rehabilitation and some will be likely be permanently disabled, said Vincent Duverger, a surgeon at the Begin military hospital in Paris.

The hospital had five operating rooms working around the clock to treat 41 casualties from the attack, most arriving in a 60-minute rush in three waves of ambulances. Some of the wounded came in trussed up with “makeshift tourniquets, tied probably by civilians from shirts or scarves.”

“High-velocity rounds cause violent wounds,” he said. “A bullet that goes through a leg, taking away muscle, bones and nerves, poses lots of questions.”

Laurent Martinez, a military psychologist, said many others are grappling with the “invisible” injuries of post-traumatic stress, depression, anxiety and other psychological disorders that can last for years.

These victims could include not just those who survived the attacks but also emergency workers who had to respond to horrific scenes.

Martinez said all the Paris attacks survivors he has treated so far have voiced deep feelings of “shame and guilt” because they’re still alive when so many others died. They are questioning instinctive things they did to survive and asking themselves if they should have or even if they could have acted differently.

“There were really horrible scenes,” he said. “People told us they had to crush people, walk on them to escape. All that provokes unbearable feelings of shame.”