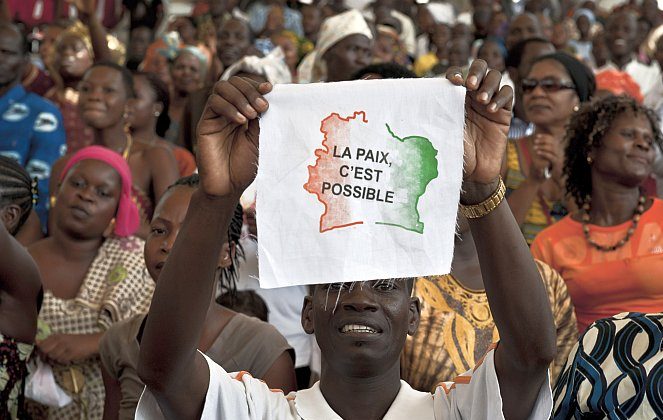 An Ivorian man displays a message on a piece of fabric reading in French "Peace is possible," as 5,000 Ivorians gather on March 27, 2011, at the Culture Palace of Abidjan to pray for peace. The national reconciliation process in Ivory Coast is facing hard times, as the conflict between the camps of President Alassane Ouattara and his predecessor Laurent Gbagbo bubble and threaten to boil over once more. (Jean-Philippe Ksiazek/AFP/Getty Images)
Africa

Recovery and Reconciliation in Ivory Coast

The Ivory Coast, or Cote D’Ivoire, is stumbling along the road to democracy, revealing the weak legs on which President Alassane Ouattara’s government is walking.

Ouattara was elected to power in 2010. Former President Laurent Gbagbo did not leave office quietly; his armed retaliation nearly brought the country to a post-election civil war. Ouattara reigned in the violence, a feat accomplished in part by forming an alliance with the Parti Démocratique de Côte d’Ivoire (PDCI).

Ouattara dissolved his Cabinet on Nov. 14 after the PDCI rejected his bill to make women and men equal partners in marriage. After he reshuffled the Cabinet, the bill passed. The dissolution was hailed as a sign of fragility and instability in the government, though Ouattara was able to regroup and push his mandate through.

The president’s power rests precariously not only on allies in government, but also on an unreliable military force. To quell the post-election conflict that flared up in early 2011, Ouattara enlisted the help of a rebel militia and Gbagbo defectors.

Keeping the military under his control will be one of Ouattara’s great challenges moving forward. Finding the money to do so—and to uphold campaign promises by stabilizing the Ivory Coast’s economy—will be another. Ouattara seems hardly able thus far to do all of this without falling into the same autocratic errors that ruined Gbagbo.

Winning the loyalty of military generals is not enough to keep soldiers in line, says Codrin Stefan Arsene, an anthropologist and political commentator trained at the University of Chicago.

“It is the colonels and sergeants who can actually move the masses of soldiers,” writes Arsene in an email. “If tomorrow Ouattara’s government fails to pay the soldiers’ salary, within 48 hours maximum, you can have another series of uncontrollable looting and street conflicts. … The military still controls the country.”

Arsene warns, “The single most important factor leading to the political instability in the country has not been crushed, but instead incorporated into the new system—I’m talking, of course, about the military regime.”

Julie Owono, a writer on sub-Saharan African issues for Global Voices Online, cites the unruly militia factions in the north and west of the country. In the western town of Duekoue, 300–1,000 civilians were killed by soldiers charged to be from Ouattara’s camp.

While Ouattara detains opposition militia members, his own forces are treated with impunity, which Owono says contributes to the climate of insecurity.

Being a soldier is a fulltime job, says Arsene.

“It is the same in Ivory Coast, Liberia, Congo, or Angola. As long as the money flows, there’s stability. When it doesn’t, there’s trouble.”

Arsene does not believe Western nations will be forthcoming with financial aid.

“The tragedy with Ivory Coast is that it isn’t Libya,” says Arsene. “In Libya, European countries (particularly France and Germany) have a much more vested interest. … You need peace in order to explore and export the much needed oil back to Europe.”

One of the greatest factors in maintaining a certain measure of stability thus far, says Ivorian blogger Kanigui Yeo, has been the simple improvements in living conditions.

“People seeing some little changes in the country like road construction,” wrote Yeo in an email. He also noted that the dismissal of ministers involved in corruption has helped stability greatly.

Owono reports that small- and medium-sized enterprises, as well as informal trade, which represent half of the country’s economic activity have been strengthened by greater access to credit.

“[In the industry of] new Technologies, I see a real enthusiasm of entrepreneurs. … There is not a week without an event linked to the Internet economy that is organized in Abidjan,” says Owono.

Yeo says, however, that hopes were too high. “In fact, people were expecting too much, maybe a miracle, not knowing really the depth of the pit in which the country was.”

Unemployment is still high, as are inflation rates.

John Campbell, a senior fellow at the Council on Foreign Relations in New York, notes in an email that if the Gbagbo and Ouattara factions that divide the nation do not reconcile, “That increased tension could slow down the remarkable economic recovery, which has been underway.”

Shake Hands and Make Up

Gbagbo is currently in custody of the International Criminal Court (ICC) on charges of war crimes, and will be tried by The Hague. The ICC has issued a warrant for the former first lady, Simone Gbagbo.

“The two Gbagbos represented a significant portion of the Ivorian population. That population needs to be reconciled,” says Campbell.

Owono and Yeo say Ivorians generally distrust the involvement of foreign powers, and trying Simone Gbagbo at home would be the best course.

“For supporters of Laurent Gbagbo, his wife appears as a figure of martyrdom,” says Owono. “An Ivorian trial, with less fanciful accusations, but dealing with real criminal facts, would give guarantees of fair administration of justice and would certainly better appease the political climate.”

Owono views the current accusation the government is bringing against Simone Gbagbo of “genocide” as “enormous and disproportionate.”

Human rights groups, such as Amnesty International, call for an investigation of Ouattara and his forces—not only Gbagbo’s—for war crimes.

Yeo notes, “Whenever the army is being attacked in a guerrilla way, it always leads to human rights violation because soldiers don’t really know who the enemy is.”

“I will leave you with one final thought,” writes Arsene in his email to The Epoch Times. “In 1990, in Africa, there were only six democratic nations where multiparty politics was allowed out of 52 countries. This meant that 46 African leaders could have been labeled as dictators or autocrats. There are currently only about 11 autocrats left in Africa out of 55 countries. The tide is clearly changing. Power is being liberalized. Africans are gaining their civil rights and liberties.”