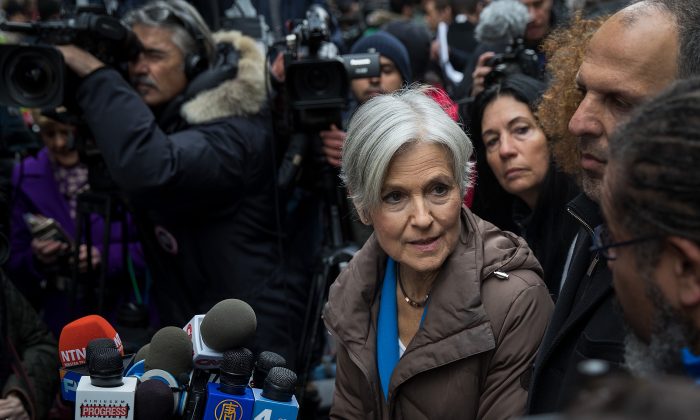 Green Party presidential candidate Jill Stein speaks at a news conference on Fifth Avenue across the street from Trump Tower Dec. 5, 2016 in New York City. Stein, who has launched recount efforts in Michigan and Wisconsin, spoke about demanding a statewide recount on constitutional grounds in Pennsylvania. (Angerer/Getty Images)
US

The latest updates on the Election Day recount efforts in Pennsylvania, Wisconsin, Michigan, Florida, and Nevada have come in.

The federal deadline for all the recounts is Tuesday, Dec. 13, while the 538 Electoral College members will meet to elect the president-elect on Dec. 19.

Former Green Party candidate Jill Stein is pushing for broader recount efforts in Michigan, Wisconsin, and Pennsylvania. She raised more than $6.5 million in an online fund for the recount efforts in the battleground states, where Donald Trump defeated Hillary Clinton. Nevada’s recount was initiated independently of Stein’s efforts, while voters in Florida have filed a lawsuit for a recount in the state.

While Stein’s team haven’t been able to produce evidence on hacking or irregularities, they described Pennsylvania’s voting system as a “national disgrace.”

A federal court will hold a hearing on Friday on whether to proceed with a statewide recount in Pennsylvania. U.S. District Judge Paul Diamond in Philadelphia scheduled the hearing.

On Tuesday, Pennsylvania election officials updated the state’s vote count to show that Trump’s lead over Clinton had shrunk to about 44,000 out of more than 6 million ballots cast in the state. That is still shy of Pennsylvania’s 0.5 percent trigger for an automatic statewide recount. A state spokeswoman said 15 provisional ballots remained uncounted, AP reported.

The effort in Michigan is effectively over after U.S. District Judge Mark Goldsmith lifted a temporary restraining order preventing state officials from stopping the recount. A state election board meeting for Thursday was subsequently canceled, the Detroit News reported.

The judge noted, in handing down his order, that Stein failed to demonstrate that she was an aggrieved candidate, as defined by Michigan state law. He then said her request to test the state’s election system lacked evidence.

“The vulnerability of our system of voting poses the threat of a potentially devastating attack on the integrity of our election system,” Goldsmith wrote.

He stipulated, however, that “invoking a court’s aid to remedy that problem in the manner plaintiffs have chosen” in seeking a recount to audit the election “has never been endorsed by any court, and would require, at a minimum, evidence of significant fraud or mistake—and not speculative fear of them,” Goldsmith added.

“Such evidence has not been presented here,” he concluded.

Trump defeated Clinton by 10,704 votes in the state.

The recount in Wisconsin is still ongoing, with the Milwaukee Journal-Sentinel reporting that 70 percent of the state has been completed. It showed that Clinton gained about 82 votes over Trump.

In Wisconsin, Trump bested Clinton by about 22,000 votes.

Officials said that the recount is on schedule to finish by the Dec. 13 deadline, with 34 of Wisconsin’s 72 counties finished.

Clinton has picked up 492 votes while Trump gained 410 votes in the statewide recount as of Dec. 7. Stein, who paid $3.5 million for the effort, gained about 60 votes, working out to more than $58,000 for each vote she gained, the Journal-Sentinel noted.

A partial recount was also started in Nevada, a state that Clinton won, by independent candidate Roque “Rocky” De La Fuente, who took less than 1 percent of the statewide vote.

“All recounts are important in that it gives that candidate’s and regular voters the opportunity to request that we recount any contest they feel should be recounted,” Nevada’s Clark County Registrar Joe Gloria told KVVU-TV in Nevada.

Ballots cast in 93 precincts will be recounted, with 84 of those precincts located in Clark County.

Clint Curtis, an attorney for the three voters, said it’s possible the court won’t respond to the lawsuit before the deadline.