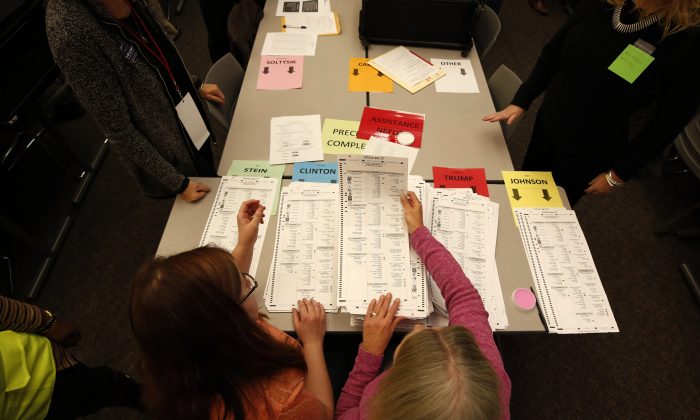 A recount of ballots cast in Oakland County, Michigan from the 2016 US presidential race takes place at the Oakland County Schools building in Waterford, Michigan on Dec. 5, 2016. (JEFF KOWALSKY/AFP/Getty Images)
Politics

DETROIT—Michigan’s recount of presidential votes is over after a judge lifted an order that forced a statewide review of millions of ballots.

The recount lasted three days in more than 20 of the state’s 83 counties. Some counties hadn’t planned to start until later.

Federal Judge Mark Goldsmith said Wednesday he must follow a decision by the Michigan appeals court, which found that Green Party candidate Jill Stein couldn’t seek a recount. She got 1 percent of the state vote and presented no evidence of fraud. Republican Donald Trump narrowly won.

The Michigan elections board stopped the recount because of Goldsmith’s new ruling and plans to meet again Thursday.

A recount is ongoing in Wisconsin, and Stein is seeking one in Pennsylvania. Trump won those states, too.