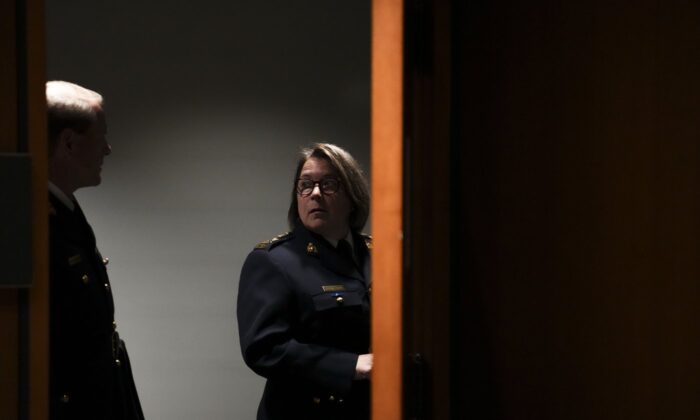 RCMP Commissioner Brenda Lucki and deputy commissioner Brian Brennan wait to appear as a witnesses at the Standing Committee on Public Safety and National Security on Parliament Hill, in Ottawa, on July 25, 2022. (The Canadian Press/Sean Kilpatrick)
Canada

The phone call at the heart of the allegations of political interference in the investigation of the Nova Scotia mass shootings had been recorded but has since been deleted, a top RCMP official testified on Sept. 9.

Deputy Commissioner Brian Brennan told the Mass Casualty Commission (MCC) that Dan Brien, director of media relations with the RCMP, had at least recorded a portion of the call, reported CBC.

The MCC is investigating the April 2020 events when a gunman killed 22 people around Portapique, N.S.

Brennan said he knew of internal efforts to retrieve the recording that were unsuccessful.

“It doesn’t exist because Mr. Brien has deleted it from whatever phone he was using,” Brennan said.

RCMP spokesperson Robin Percival corroborated to CBC that “some part” of the call had been recorded but that it is “no longer available.” Percival said the RCMP is reviewing the matter.

The phone call in question occurred on April 28, 2020, and involved RCMP staff from its headquarters in Ottawa and from H Division in Nova Scotia.

During the teleconference, RCMP Commissioner Brenda Lucki reportedly told H Division she had made a “promise” to the minister of public safety and the prime minister’s office to publically reveal information about the firearms used in the attack, and allegedly tied it to pending Liberal gun legislation.

This information was corroborated by several RCMP employees on the call, such as Superintendent Darren Campbell and communications director Lia Scanlan.

Campbell has said H Division did not want to release the weapons information so as to not jeopardize its investigation.

Lucki had initially shared that same view, and told her superiors as much in an email on April 23, saying the information should not be widely disseminated.

Lucki has maintained she was never under political pressure to release the weapons information and has said her previous remarks were misunderstood.

“Regarding my use of the word ‘promise’ during the [April 28] meeting I had with my team following that press conference at that time, and in that context, I was trying to convey that I’d already confirmed to the minister that the information about the weapons would be released during the press conference, a confirmation made based on the information I had been provided [by her communications staff],” Lucki told the House of Commons public safety committee on July 25.

Lucki explained the controversy as a “miscommunication” problem and said the question on whether information on firearms would be released to the public came from minister Bill Blair’s chief of staff. Blair, now in charge of emergency preparedness, held the public safety portfolio at the time.

The government announced a ban on “assault-style” firearms on May 1, 2020, a few days after the tragedy. Blair told the public safety committee on July 25 that the date of the announcement was picked shortly after the events of April 18-19, 2020.

Prime Minister Justin Trudeau said in late June there was no “undue” pressure exerted on Lucki.

The Conservatives have accused the government of a “coverup.”

“The staff meeting in which the Commissioner revealed this promise was recorded by the former Director of Communications to a Liberal Public Safety Minister, but it has disappeared,” Tory MPs Raquel Dancho and Pierre-Paul Hus wrote in a Sept. 14 statement.

“Canadians can only wonder how long it took before that recording was mysteriously erased.”