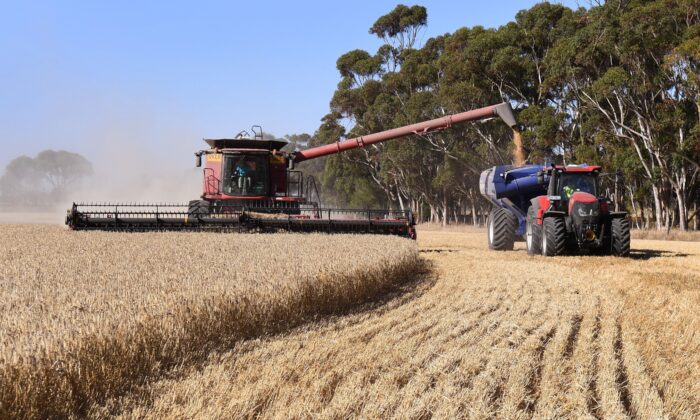 A field of wheat being harvested on a farm near Inverleigh, Australia, on Jan. 12, 2021. (William West/AFP via Getty Images)
Australia

Australian agriculture had a bumper year in 2020-2021 as the sector witnessed a 17 percent surge in production value.

The census, which was filled out by 100,000 Australian farmers in July 2021, provided an overview of the agriculture industry.

ABS program manager of agriculture statistics Amanda Clark said the agriculture sector had a good year in 2020-2021 as overall yields stayed above average and many broadacre crops such as wheat, barley, and canola saw record production.

“Many farmers reported crop yields being at ‘once in a lifetime levels, with records broken in many regions for key commodities.”

In comparison, canola saw a 114 percent increase in gross value to $2.9 billion.

Meanwhile, the ABS report stated that the production and value of irrigated crops rose significantly thanks to drought-breaking rainfall and improved seasonal conditions.

Additionally, around 1.9 million hectares of agricultural land were irrigated across Australia, an increase of 28 percent, as more rain was recorded during the year.

The Australian Bureau of Meteorology said the 2020-21 financial year was the coolest and wettest for Australia over the past four years.

Meanwhile, livestock saw mixed results. While egg production jumped by nearly a third to over $1 billion, wool and milk production dipped by four percent and three percent to $2.6 billion and $4.7 billion, respectively.

The decreases in the value of livestock disposals occurred because many farmers decided to rebuild their stocks with improved seasonal conditions.

Food Crisis Around The World

The agriculture figures come as the World Bank has warned that a food crisis is hitting many poor and developing countries.

In the latest food security update, the World Bank said that as of July 15, the prices of agriculture products around the world grew by 19 percent compared to January 2021, with maize and wheat prices increasing by 15 percent and 24 percent, respectively.

At the same time, high food price inflation was seen in almost all low and middle-income countries, with many experiencing two-digit inflation.

The international organisation said while food prices stood at high levels before, the war in Ukraine had affected the global trade, production and consumption of commodities, driving food prices even higher.

The World Bank predicted that food prices would continue to remain at historical highs throughout 2024.