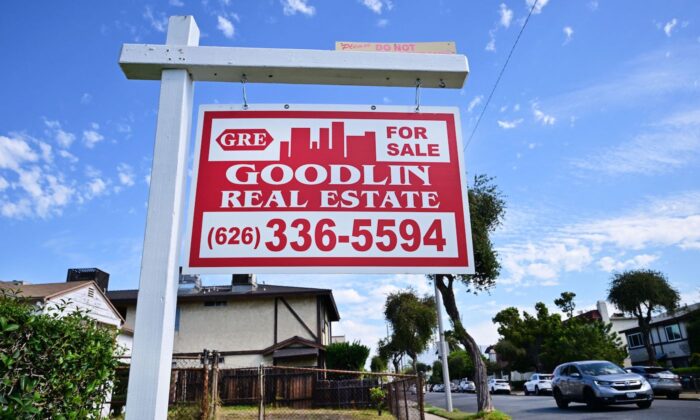 A for sale sign is posted in front of a property in Monterey Park, Calif. on Aug. 16, 2022. (Frederic J. Brown/AFP via Getty Images)
US Real Estate

A record number of home sellers dropped their asking price in July, as the U.S. housing market began to tank rapidly, according to new data from Redfin.

July saw the biggest annual decline in U.S. home sales in more than a year.

Many buyers have fled the housing market amid high mortgage rates and rising prices, while some prospective homeowners have refrained from selling, as home price growth began to slow.

During the pandemic, millions of Americans flocked to quiet metropolitan areas like Boise, Phoenix, and Tampa in search of extra space and lower housing costs in order to work from home, causing home values in the new boomtowns to skyrocket.

Sales dropped 19.3 percent annually from July 2021, the lowest level since the beginning of the pandemic, when the housing market was nearly stagnant, according to Redfin.

Many prospective homebuyers were priced out of the market, especially first-time buyers, while others were wary of a potential decline in home values in the near future.

The tumble in sales was primarily caused by mortgage rates rising above 5 percent to its highest level in years, dramatically cooling the housing market, while inflation rates remain elevated across the country.

The Federal Reserve’s attempt to raise interest rates to slow inflation earlier this year caused the jump in mortgage rates, which promptly ended the housing boom.

Meanwhile, price growth is now in the single digits after two years of double-digit increases, when rising mortgage rates started to soar causing demand and sales to slump.

Home prices have increased 7.7 percent to their slowest pace since June 2020, when the pandemic was at its height.

Even home sellers in major pandemic boomtowns are now slashing prices as they adapt to a rapidly cooling housing market.

Boise, Idaho, saw 70 percent of houses on the market drop their asking price in July, more than double the 30 percent of homes that slashed rates a year earlier, according to Redfin.

“Individual home sellers and builders were both quick to drop their prices early this summer, mostly because they had unrealistic expectations of both price and timelines,” said Boise Redfin agent Shauna Pendleton.

Redfin said that the city saw the highest share of price drops out of 97 U.S. metropolitan areas.

“They priced too high because their neighbor’s home sold for an exorbitant price a few months ago, and expected to receive multiple offers the first weekend because they heard stories about that happening,” said Pendleton.

Another reason why some potential sellers are backing off is that their properties may sell for less than would have earned only a few months ago, during the housing rush.

Many of the sellers who did sell their homes had to settle for less, with at least 21 percent of sellers dropping their asking price in July.

Homeowners are also staying put because they acquired their homes during a period of low mortgage rates and are hesitant to sell now because of the higher rates.

This has resulted in the number of new listings beginning to fall, which has dropped 13.5 percent year over year, the worse since the pandemic.

Meanwhile, thousands of available homes are now sitting longer on the market.

The housing slowdown has caused a cascade effect throughout the real estate industry, hitting mortgage lenders, homebuilders, and brokerages alike.