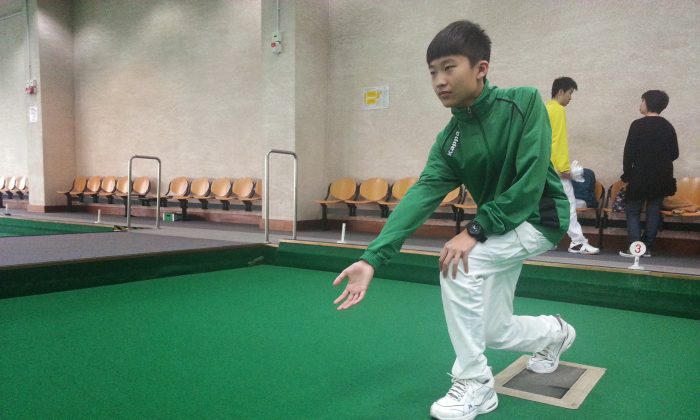 HONG KONG—A record number of participants joined the Youth Novice competition this year, indicating that more and more youngsters were into the game that used to associate with an older generation.

The competition, which was played at the indoor greens at the Ap Lei Chau Sports Complex on Sunday March 15, is open to bowlers under the age of 18 years who have never won any national competitions or youth competitions.

This year a total of 58 youngsters, including 51 boys and 7 girls, participated in the 3-day competition, which culminated with the Final on Sunday Mar 15. The previous record was 56 participants in 2012.

The competition format is a multiple level round-robin. Players are divided into 14 groups in the first round. The winner of each group and two best seconds qualified for the next round. In the second round the players were divided into four groups, with the top of each group qualifying for the knock-out stage.

After being knocked out twice at the semi-final stage of the Youth Novice competition in the last two years, 13-years-old Marcus Tse finally got his hand on the trophy this year.

Tse, a Form 2 student from HKFYG Lee Shau Kee College, has trained under the Young Athletes Lawn Bowls Training Scheme (YAS) for five years. He won all games in both the preliminary and the second round to enter the quarter-finals. He then defeated Wong Ming Fung to enter the final.

Lam started the game well, won two shots in the first end and lead the game for a long period of time. However, Tse took advantage of Lam’s loss of concentration in the seventh end to take three shots and draw level. Tse then took a crucial shot in the last end to take his first lawn bowls trophy.

Tse believed that his bowling experience helped him to win the game: “I have been actively participating in a number of league games and open competitions with Tuen Mun Sports Association in the last two years and this definitely helped my game.

“I am now more consistent in drawing and got knowledge of attacking shots. This is very important in such kind of competition. On the other hand my failure at the semi-finals stage for two consecutive years also gave me more motivation to perform this year.

“Now I finally won my first trophy, I am looking forward to joining the Hong Kong Youth Development Team to advance my learning curve in bowls,” said a confident Tse.

Warren Kwok, Vice-President at the Hong Kong Lawn Bowls Association in charge of youth development, was very pleased with the increase in number of participants this year: “Last year we had only 44 participants and this year it was increased to 58. It seems that more and more kids are into lawn bowls nowadays and we hope they will become a new generation of bowlers with whom we can build on and raise the overall standard in Hong Kong.”