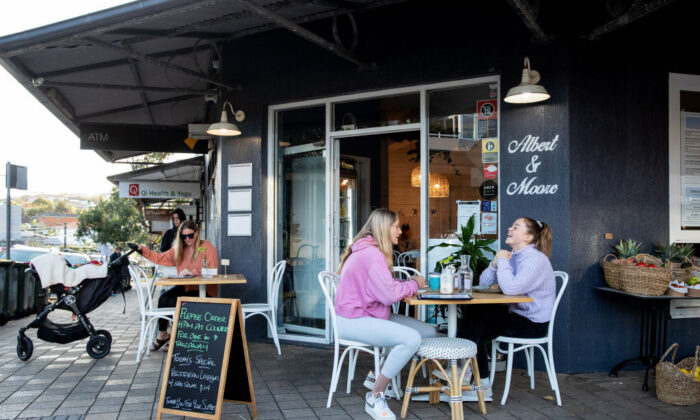 People eat breakfast at a café in Sydney, Australia, on May 15, 2020. (Cameron Spencer/Getty Images)
Australia

Australians are starting new businesses in record numbers, with more than 160,000 added to the economy in 12 months.

The seven percent jump over the course of a year represents a record lift since the data was first recorded 19 years ago, CommSec economist Craig James said.

The surge was led by a 10 percent increase in non-employing businesses, with James suggesting more Australians were “following their dreams” and setting up their own businesses in the living-with-COVID era.

“No wonder that larger businesses can’t find staff – foreign borders have been closed, and people have left existing companies to set up their own business,” he said.

Victoria saw the sharpest rise in new businesses, up 10.9 per cent, followed by the ACT, up 7.7 percent.

The construction industry saw the largest uptick in new business starts, with the industry recording an increase of more than 33,000 businesses.

The lift in new construction businesses in the past two years was likely driven by the HomeBuilder stimulus program and the low-interest rate environment, which fuelled demand for construction services, KPMG economist Brendan Rynne said.

But with fixed-price building contracts common in the housing sector, Rynne is concerned these new businesses would struggle now that material costs are so high and labour shortages have worsened.

“If these new construction companies are unskilled in managing the financial risk associated with the current environment – higher than normal volumes, fixed price contracts, very high-cost inflation – then we could see more business failures in the sector increasing over the short term,” he said.

He said the data also showed the failure rate of solo operations was higher than in businesses with staff. However, as many as 50,000 of them successfully levelled up during the pandemic.

James said the next two years would test the fledgling businesses.

“That is always the case, but particularly now in light of rising interest rates and the potential for slowing economic activity,” he said.

“And the survival of small businesses will be especially important for the broader job market and central bank policy.”

Queensland-based residential builder Oracle Homes collapsed on Wednesday, with about 70 staff sacked and building work halted on about 300 homes.

CommSec economist Ryan Felsman said this showed the regions were also running at “full employment” in line with the national jobless rate.

Rising interest rates are starting to slow spending momentum, according to ANZ.

So far in August, the daily average spend was 0.1 per cent weaker than the July average, with a fall in discretionary retail spending leading to the slowdown.