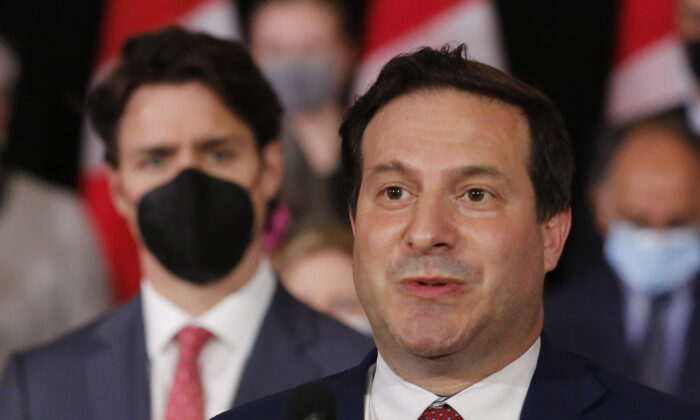 “2021 was a record year for illegal firearms seizures but there is still a lot more work to do,” Mendicino told reporters on Aug. 17.

“I think it’s really important that Canadians know the federal government does see as a priority the need to stop illegal trafficking of guns at our borders,” he said, according to Blacklock’s Reporter.

Federal records show that the Canadian Border Services Agency (CBSA) seized over 1,200 firearms at the border in 2021, which is more than double the number seized in 2020.

“Handguns are the number-one type of guns used in homicide,” Mendicino said. “It’s a type of gun that has been growing on average between 45,000 and 55,000 new registrations each and every year and we want to stop that trend. We hope by doing so we will bring down handgun violence.”

In CBSA’s 2021 “Year In Review” report, the agency said that, between January and November of 2021, it carried out almost 340 gun seizures and confiscated a total of 908 firearms—316 of which were handguns and 125 were semi-automatic pistols.

Mendicino’s office said in a November 2021 briefing note that it was unaware of how many firearms the CBSA had seized during the year.

“The total number of firearms successfully smuggled into Canada is unknown,” said the note titled “Efforts To Address Firearms Smuggling And Trafficking,” according to Blacklock’s.

The note also said that the seizures were “mostly from non-compliant travelers attempting to retain their personal firearms.”

The federal government announced a national freeze on handgun imports less than two weeks ago, thus bringing legislation proposed in Bill C-21 into action sooner. The temporary freeze will stay in effect until parliament passes the bill and makes it permanent.

“Given that nearly all our handguns are imported, this means that we’re bringing our national handgun freeze into effect even sooner,” Mendicino said at an Aug. 19 press conference.

The House of Commons public safety and national security committee heard testimony in February that said criminals can easily smuggle guns into Canada.

Mark Weber, national president of the customs and immigration union, testified on Feb. 1 that just “one one-millionth of all rail cargo” is inspected before crossing the border.

“In other words, there’s almost a zero percent chance that any illegal weapons entering the country via rail will ever be found,” said Weber.

As a result, Weber said the number of illegal firearms seized at the border is a small percentage of the amount getting through.

“As things stand, not only is Canada’s ability to prevent smuggling lacking, but its capacity to gather reliable and sound data is also inadequate,” he said.