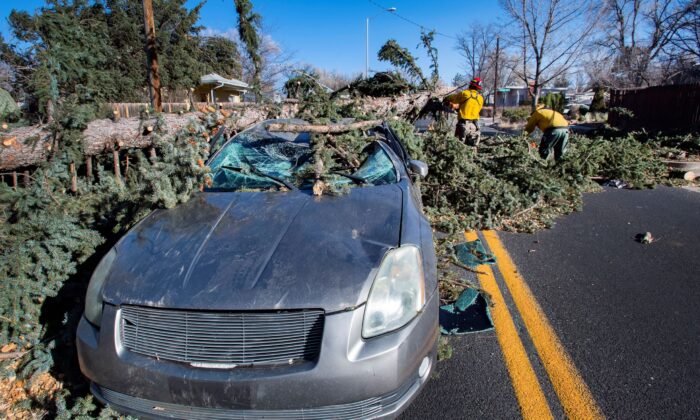 Members of the Colorado Springs Utilities Catamount crew remove a fallen tree that crushed a car driving westbound on Unitah Street in Colorado Springs, Colo., as wind gusts reached more than 100 mph in the Pikes Peak Region on Dec. 15, 2021. (Christian Murdock/The Gazette via AP)
US News

OMAHA, NEB.—Much of the Midwest braced Wednesday for powerful winds, heavy rain and a chance of tornadoes as temperatures felt like summertime despite the official start of winter being only days away.

Forecasters across the Great Plains predicted unusually warm weather, including likely record-breaking high temperatures in the mid-70s for much of Nebraska, Kansas, Iowa and parts of Missouri. The warmth comes with dangerous winds and threats of violent storms, on the heels of devastating tornadoes last weekend that cut a path through states including Arkansas, Missouri, Tennessee, Illinois and Kentucky, killing at least 88 people.

The National Weather Service issued a high wind warning for an area stretching from New Mexico to upper Michigan—including Wisconsin and Illinois—with sustained winds between 25 mph and 40 mph (40 kph to 64 kph) and widespread gusts of 60–75 mph (97–121 kph). The weather service’s Storm Prediction Center said embedded gusts of up to 100 mph (161 kph) and a strong tornado or two were also possible, particularly in Nebraska and parts of Iowa and Minnesota.

Gusts topping 80 mph (129 kph) were recorded in some areas before noon, including the Texas Panhandle and western Kansas. The National Weather Service said an automated observation site in Lamar, Colorado, recorded a gust of 107 mph (172 kph) Wednesday morning.

Officials also warned that strong winds coupled with drier conditions along the western edge of the weather system posed a dangerous fire risk.

“Essentially, if there are any fires today, it’s going to be next to impossible—if not impossible—to keep them under control, just because of the wind,” National Weather Service meteorologist Jordan Thies, based Hastings, Nebraska, said. “For our neck of the woods, this is about as bad as it gets.”

Damaging winds are likely to bring down trees and power lines, leading to power outages, the weather service warned. Some western regions could see visibility cut by blowing dust, while blowing snow could hamper travel in central Nebraska and north, Theis said. Some schools in Nebraska canceled in-person classes, and dozens of schools in Iowa and Nebraska were closing early in anticipation of bad weather.

“Travel will be very hazardous for high profiles vehicles, and delays are possible along interstates due to overturned tractor trailers,” the weather service said.

National Weather Service meteorologist Alex Ferguson, based in Amarillo, Texas, described the system as a “pretty quick-hitting wind storm.” Though blowing dust had reduced visibility in the Texas Panhandle, conditions had not risen to the level of a dust storm.

Officials urged people to bring in or secure holiday decorations, trash cans and outdoor furniture, which they said could become hazardous projectiles in the strong winds.

The winds and storms were expected to move quickly east, Thies said. After that, forecasters expect temperatures to plunge, with below freezing weather in the northern Plains.