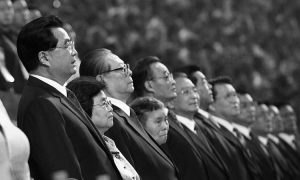 Record High of Confirmed CCP Virus Cases in Many Countries

The epidemic in Xinjiang keeps getting worse. On July 29, officials reported an additional 96 confirmed cases and 18 asymptomatic patients who are all concentrated in Ürümqi. The spokesperson of the World Uyghur Congress indicated that the epidemic in Xinjiang is very severe and local residents do not believe in the official reports. The local government implemented tighter control, not only did they lock down the city, but also the homes. They even threaten the residents saying: “Break your legs if you go out, tear your mouth if you talk back.”

The epidemic has spread to nearby cities from Dalian, Liaoning Province. On July 29, confirmed cases related to Dalian City were reported in Beijing. At the moment, all kindergartens and 1,614 cultural services establishments are all closed in Dalian City.

On July 30, Hong Kong reported 149 confirmed cases, making a new record of highest confirmed cases in one day. The local government is transforming an exhibit center into a temporary hospital that will provide 2,000 hospital beds. It is estimated that it will be in operation in 2-3 days.

Australia has also registered a new record high in infected patients. On July 30, the state of Victoria reported 723 new confirmed cases, breaking the state and national single-day record for confirmed cases. Starting from next Monday, August 3, it will be mandatory to wear masks in public in Victoria State.

On the same day, the number of confirmed people with the virus in India surpassed 50,000 for the first time, with a rapid increase of infection rate in the rural areas. Although the epidemic is not getting better, India still insists on entering the third phase of reopening. Curfew will be lifted from August 1, gyms and other sports venues will reopen from August 5, but schools, cinemas and bars will remain closed.

On July 30, Brazil’s presidential press office issued a statement announcing that First Lady Michelle Bosonaro had tested positive for the CCP virus. The statement said that the first lady is in good health and will follow all established protocols. She is being accompanied by the medical team of the Presidency of the Republic.

Prime Minister of Britain, Boris Johnson, warned on July 30 that the epidemic has returned in some European countries and in some parts of the UK. He warned the citizens to be alert and adhere to social distancing while in public.