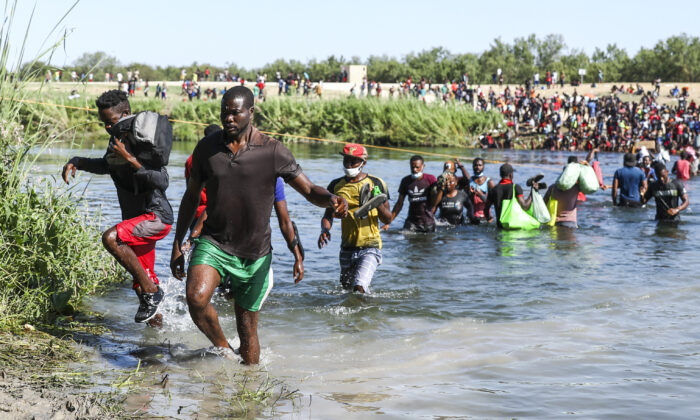 Illegal immigrants take supplies back and forth between Acuña, Mexico, and the United States (far side) across the Rio Grande, the international boundary with Mexico, in Acuña, Mexico, on Sept. 20, 2021. (Charlotte Cuthbertson/The Epoch Times)
Immigration & Border Security

Arrests of illegal immigrants at the U.S. border with Mexico during President Joe Biden’s first October in office were the highest ever recorded in the month, data released Monday show.

Customs and Border Protection (CBP) made 164,303 arrests in October.

That’s slightly higher than preliminary estimates and 55 percent higher than the previous high for the month.

The bulk of those taken into custody, or two-thirds, were single adults. About a quarter were family units and the rest were minors who weren’t with a responsible adult.

Agents saw a large jump in illegal immigrants trying again to enter the United States after being ejected before. About 30 percent of the arrests were of people agents had at least one encounter with in the previous 12 months.

The numbers didn’t include illegal immigrants who evaded agents. That number was estimated to be around 50,000, according to internal data obtained by The Epoch Times.

“Joe Biden continues to ignore the historic crisis his open border policies have created. The numbers do not lie, this crisis is nowhere near under control,” Ronna McDaniel, chairwoman of the Republican National Committee, said in a statement.

The Biden administration did not mention a new record being set, instead focusing on how the apprehensions dropped by about 22 percent from the month before.

“October marks the third straight month of declining unauthorized migrant encounters along the Southwest border—with particularly sharp drops in families and unaccompanied children—and CBP’s workforce continues to work with partners across the federal government and throughout the hemisphere to disrupt the smugglers intent on exploiting vulnerable migrants for profit,” acting agency Commissioner Troy Miller said in a statement.

U.S. officials did expel over half of those arrested under Title 42, a federal authority that was imposed during the COVID-19 pandemic that makes it easier to kick out immigrants because of concerns they may have the disease and spread it. Overall, 99 percent of the arrests triggered expulsion under Title 42 or Title 8, a federal immigration law.

Experts say Biden’s reversal or ending of key Trump-era immigration enforcement policies led to the explosion in illegal immigration. The Biden administration has said the immigration system needed an overhaul and that it would take time to implement a massive change.

CBP is working to “manage migrant encounters in a safe, orderly, and humane way,” Miller said.

The moves included halting the ejection of illegal immigrant children using Title 42; ending the “Remain in Mexico” program, which forced many asylum seekers to wait in Mexico for their claims to be heard; and stopping construction of the border wall.

Immigration courts have a worsening backlog of cases. The number climbed to nearly 1.5 million by the end of October, according to researchers at Syracuse University.