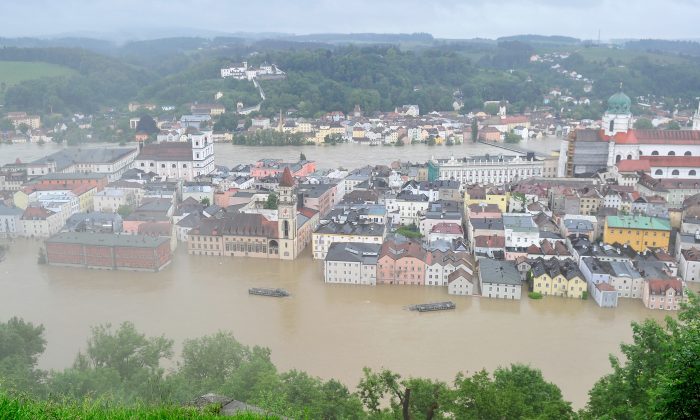 Unlike the storms that battered parts of the United States, persistently bad weather and rain lead to record floods in Germany. Four people have been confirmed dead, rivers flooded medieval towns, and officials have estimated the damage will cost hundreds of millions of dollars.

Normally, the three rivers converging in the Bavarian city of Passau provide a picturesque setting for the medieval town in the Alps region in the south of Germany. On Tuesday, however, waters rose to the highest levels in 500 years and wreaked havoc on the local population, their homes, and their businesses.

“We still don’t have power and [drinking] water supply,” Mayor Jürgen Dupper told Süddeutsche Zeitung. German Chancellor Angela Merkel traveled to the region to assess damages and assured citizens that the federal government would help with funds of up to $125 million for all affected regions.  “We want to help quickly, because even if the water is receding, what remains are the damages,” she told reporters Tuesday.

The good news for Passau is that the high water levels began receding Tuesday, but the interior of the town remains inaccessible. “We are moving away from the catastrophe toward just elevated water levels,” a city representative told Süddeutsche Zeitung. Most of the thousands of evacuated people could return to their homes in southern Germany.

While the population of Passau and other southern regions expected to start weeks of cleaning and rebuilding efforts, the situation is getting worse downstream in the east of Germany. The water keeps rising in the east, which suffered from a “flood of the century” in 2002.

The river Elbe reached as high as 28.9 feet, about four times its normal level in the eastern state of Saxony. During the last catastrophe in 2002, the highest recorded level was 32.7 feet. As many as 11,000 people in the region had to be evacuated as local firemen and some 5,600 soldiers fortified dams in an effort to protect the cultural towns of Halle, Dresden, and other cities nationwide. Despite the effort, several towns in the states of Saxony and Thuringia have been flooded.

“This is the highest we have seen in 400 years,” said a Halle City representative. A few hundred miles further south in Dresden, officials estimate the worst will be over Thursday but also said there are not guarantees.

“I will have to take a week of holiday to take care of the damages,” a resident of Passau told the Süddeutsche Zeitung. Most of the insurance companies decline to insure households and businesses in high risk environments, so people will be forced to depend on help from the government.