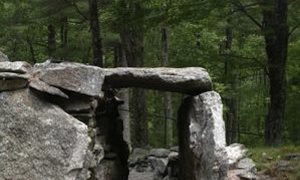 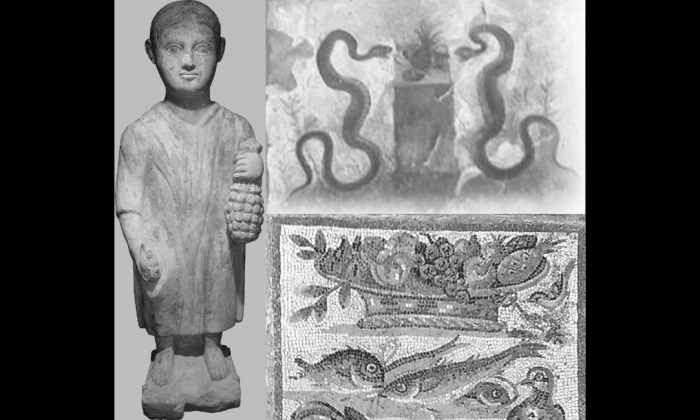 Three depictions of pineapples from the Roman era. The statue is from the third century A.D. and is now in the Musée d’Art et d’Histoire of Geneva. At the top right, a fresco in “Casa dell’Efebo” in Pompeii, and at the bottom right, an Augustan age mosaic, now in the palace “Massimo” of the National Museum of Rome. (Lucio Russo)
Beyond Science

CAVALESE, Italy—The year 1492 is one of history’s most famous dates, when America was discovered by Europeans. However that “New World” may have been already known to the ancient Greeks, according to a book by Italian physicist and philologist Lucio Russo.

The translated title for Russo’s book would be “The Forgotten America: The Relationship Among Civilizations and an Error Made by Ptolemy.” But the author told the Epoch Times that the title for the English version, which isn’t ready yet, will probably be “When the World Shrunk.”

Among the many clues of contact between ancient Europeans and Native Americans are the few pre-Columbian texts to have survived the Spanish devastation.

In a book about the origins of the Maya-Quiché people there are many interesting points. The fathers of that civilization, according to the text, were “black people, white people, people of many faces, people of many languages,” and they came from the East. “And it isn’t clear how they crossed over the sea. They crossed over as if there were no sea,” says the text.

However, researchers later decided to translate the Mayan word usually meant for “sea” as “lake.”

There are also many Mayan depictions and texts about men with beards. But Native Americans do not grow beards.

Furthermore, some artworks of the ancient Romans show pineapples, a fruit that originated in South America.

Russo, who currently teaches probability at Tor Vergata University of Rome, says the main reason why researchers think America wasn’t known to ancient Greeks is not due to lack of proof, but to scientific dogma.

For years, the theory that civilization evolves according to fixed stages has been dominant. For example, a civilization discovers fire, then invents the wheel, writing, and so on, all the way to modern technology and democracy. All civilizations are supposed to pass through these stages and they can be ranked according to their level of evolution.

But Russo presents a different scenario: inventions, like writing or breeding, didn’t develop independently in every different civilization, but filtered from one to another.

It is also untrue that science becomes better and better with time. There were, in fact, many instances of scientific and cultural decay, like the destruction of Carthage and the fall of Greek civilization, from which the Romans inherited only a small portion of their scientific knowledge.

Importantly, one of the skills they didn’t inherit was how to navigate the oceans.

You can get an idea of this by considering that “the size of the ships in the Hellenistic era was exceeded only in the era of Napoleon” and that Columbus based his trip on a partial recovery of Hellenistic math, according to the book. The Greeks were, among other things, at that time the only civilization that was able to understand that the Earth was round—an understanding that was later lost.

Even today we are in an epoch of “scientific crisis,” Russo told the Epoch Times. But it’s a crisis different from that of Roman times. The modern decay hides itself using technological advancements as a mask and consists in shrinking the availability of knowledge, now the property of a few people.

The Error of Ptolemy

So, how did people come to forget America, if it is true that it was already known to the ancients? The error, according to the author, is mainly due to Ptolemy, who developed a world map finding a midpoint between the claims made by various ancient sources.

The key problem is the identification of the Fortunate Islands, which the ancient Greeks sometimes referred to, as the Canary Islands (near the West coast of Africa). But the Greeks were actually referring to the Antilles, according to Russo. The misunderstanding was due to the Romans and other post-Greek people’s disbelief and incapability of navigating the oceans.

With philological and mathematical reasoning, Russo leads the reader to understand the meaning of all of Ptolemy’s errors—which are generally considered pretty huge—showing how the knowledge of the planet by ancient Greeks was instead very precise. Ptolemy missed the latitude of Canary Islands by 15 degrees latitude, making them to appear on the point of the map were the Antilles would expected to be. Of course America was not on his map.

According to Russo, the book prompted two kinds of extreme reactions. Scientists and philologists showed enthusiasm, while negative reactions came from historians and geographers, whom he said were often unable to understand some logical aspects of his works.

Russo thinks we have “a lot to learn” from the ancient Greeks. For example we should “try to limit excessive specialization,” because the most interesting things can be understood only by those who have a grasp of more than one aspect of human knowledge.