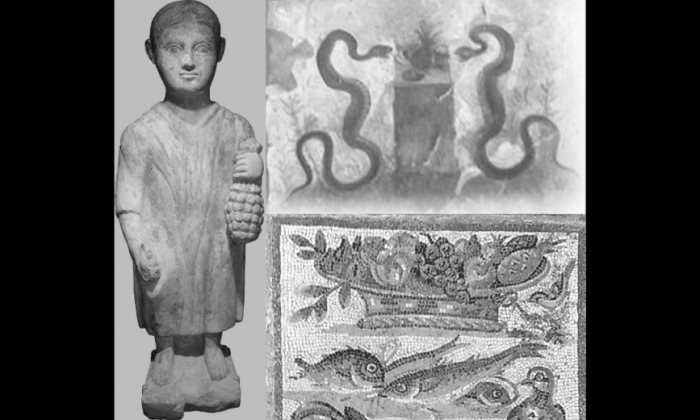 Three depictions of pineapples created by ancient Romans. Pineapples originated in South America, and these works are part of a growing body of evidence that ancient Europeans had contact with the New World. (Lucio Russo)
2013 Year in Review

Reconsidering History as We Enter the New Year

Conventional understandings of history are continually changing as historians and scientists try to patch together an understanding of the Earth and humanity’s past using fragmented artifacts and continually developing technologies.

Entering a new year often inspires us reflect on where we’ve been and where we’re going. Epoch Times has compiled some articles exploring evidence that could inspire a different view of history, one that may change the text books of the future or at least keep us questioning what we think we know.

The “New World” may have been known to the ancient Greeks long before modern Europeans discovered it in 1492, according to Italian physicist and philologist Lucio Russo.

Among the many clues of contact between ancient Europeans and Native Americans are the few pre-Columbian texts to have survived the Spanish devastation.

In a book about the origins of the Maya-Quiché people there are many interesting points. The fathers of that civilization, according to the text, were “black people, white people, people of many faces, people of many languages,” and they came from the East. “And it isn’t clear how they crossed over the sea. They crossed over as if there were no sea,” says the text.

It is commonly held that advanced human civilizations only emerged some 7,000 years ago. Artifacts and structures continue to be found and investigated, however, that seem to suggest advanced prehistoric societies existed long before this time.

At the bottom of Israel’s lake Kinneret, also known as the Sea of Galilee, is a massive, enigmatic structure that could be more than 9,500 years old. A thorough investigation of the structure has yet to be made.

It was discovered by the National Institute of Ocean Technology in 2000 in the Gulf of Khambhat (formerly known as the Gulf of Cambay). The circular structure made of boulders and rocks spans about 5 miles. It has only been explored via sonar scanning and dredging, which has pulled up at least one prehistoric artifact.

The Princeton website explains why some archaeologists refuse to accept the age estimates: “One major complaint is that artifacts at the site were recovered by dredging, instead of being recovered during a controlled archaeological excavation. This leads archaeologists to claim that these artifacts cannot be definitively tied to the site.”

Prehistoric Artifacts and Sites in America

Several prehistoric sites and artifacts have emerged in the United States baffling academics. Here’s a look at two such finds.

The Footprint and the Trilobite

A fossilized footprint left by someone stepping on a trilobite, an extinct marine arthropod. Trilobites are known to have gone extinct around 260 million years ago. (Minghui.org)

In June of 1968, an amateur fossil collector made the discovery of a lifetime, stirring ripples across the scientific community. About 40 miles west of Delta, Utah, was a fossilized human footprint shown over a trilobite, an extinct marine arthropod. The foot—wearing size 13 shoes which were 10.25 inches long and 3.5 inches wide—stepped on a living trilobite according to The Unexplained Net, and Books Fact.

Trilobites are known to have become extinct around 280 million years ago, and according to the current scientific timeline, humans who wore shoes would certainly not have existed at that time. The age of the fossil is estimated to range between 200 and 600 million years.

The Bell in the Coal

In 1944, a 10-year-old boy in West Virginia dropped a lump of coal onto the ground, and to his surprise a metal bell was revealed inside. The coal was bituminous, a 300-million-year-old piece of coal, reports Dr. John D. Morrid at the Institute for Creation Research. Upon further examination and analysis, the bell was found to be comprised of an unusual mix of metals, different from any known means of production today, or on record.

Evidence of mythical creatures, such as mermaids and giants, has stirred great interest though it has not definitively influenced the current scientific paradigm.

In biblical texts, giants were called Nephilim. Journals of sailors and explorers contain numerous accounts of them, and today many of the remains found around the world match the description of a giant humanoid.

In several places around the United States, the graves containing giant bones have been discovered. An archaeological survey of Kentucky on the University of Kentuck website mentions at least three reports of giant graves. Little recognition has emerged from the scientific community of this discovery, despite thousands of giant skeletons being unearthed around the world.

An illustrated reconstruction based on a fish fossil found in China in September of a fish that lived over 400 million years ago. (Brian Choo)

In China, a fish fossil was found in September that could dramatically shift history.

The fossil, which scientists say is of a 419-million-year-old fish, “disproves the long-held theory that modern animals with bony skeletons (osteichthyans) evolved from a shark-like creature with a frame made of cartilage,” reported AFP.

While it is often thought that many animals and humans evolved from bony frames, the new find of this primordial fish fossil shows that a bony skeleton was in fact the prototype for all vertebrates, a group of researchers wrote in the journal Nature.

“This astounding discovery does throw a spanner in the works of some long-held ideas about vertebrate evolution,” said study co-author Brian Choo from the Institute of Vertebrate Palaeontology and Palaeoanthropology in Beijing.

“The implications are clear: ostheichthyans did not independently acquire their bony skeletons, they simply inherited them” from their ancestors—heavily-armoured fish known as placoderms that are accepted to be the most primitive members of the jawed vertebrate family,” said said Choo.

“Osteichthyans didn’t go through an unarmoured shark-like… stage during their early evolution only to reacquire their bone later on, they simply kept the plates directly from their… ancestors.”

Discovered in Vero Beach, Fla., a 13,000-year-old drawing of a mammoth or mastodon on a 3-inch bone fragment. Mammoths were not believed to be in North America before this discovery. (Smithsonian Museum Conservation Institute)

Discovered in Vero Beach, Fla., on a 3-inch bone fragment was an etched drawing of a mammoth or mastodon. Scientists at the Smithsonian Conservation Institute dated the drawing to be 13,000 years old. The artifact is the oldest ice age art depicting an animal with a trunk. Mammoths were not originally believed to have been in North America during this time.