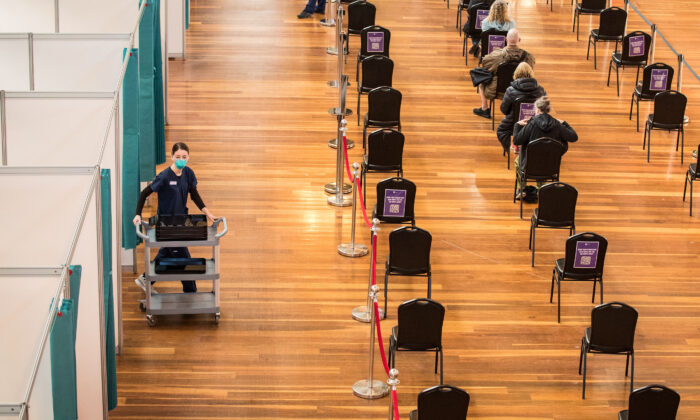 A nurse is seen inside the Royal Exhibition Building Vaccination Centre in Carlton in Melbourne, Australia, on Aug. 25, 2021. (Darrian Traynor/Getty Images)
Australia

The alternative union movement, the Australian Medical Professionals’ Society (AMPS), will be organising one of the largest formal conferences to discuss the consequences of the lockdown policies on the medical profession in the country.

AMPS is part of Red Union, an umbrella organisation for several newly established trade unions servicing teachers, nurses, police officers, and doctors. Red Union was founded in response to the actions of traditional union groups during the pandemic, who mostly cooperated with state-backed vaccine mandates.

The “Reclaiming Medicine” conference on Sept. 10, 2022, at the Amora Hotel Riverwalk in Melbourne will feature notable speakers, including author Naomi Wolf, who wrote “The Bodies of Others: The New Authoritarians, COVID-19 and the War Against the Human,” and Amy Kelly, program director for the War Room/DailyClout Pfizer Documents Analysis Project.

Local experts will also be speaking, including economist Gigi Foster, who will present her cost-benefit analysis of lockdown policies, and Dr. Pierre Kory, the world’s foremost expert on using ultrasound to diagnose critically ill patients and is also the former chief of the Critical Care Service and Trauma and Life Support Center at the University of Wisconsin.

“AMPS believes the current range of medical, medicolegal and medico-political issues brought about by the pandemic requires a greater breadth of discussion,” the organisers said on its website, adding that many medical professionals felt silenced during the pandemic and were forced into abiding by the official narrative around COVID-19.

“In the name of medicine, and towards maintaining a uniform official narrative, we saw unprecedented censorship of scientific debate and respectful discourse from social media providers.

“In the name of medicine, medical journals published articles stating that questioning a viable hypothesis was a conspiracy theory,” the group said.

AMPS said the conference would be one of the first to deal with these issues publicly.

Australian authorities have been strict in enforcing compliance around following COVID-19-related science.

The Australian Health Practitioner Regulation Agency (AHPRA) is the country’s peak accreditation body for health practitioners, which works with 15 other government bodies (National Boards) responsible for professions such as nurses or pharmacists.

AHPRA has taken steps to warn and suspend medical practitioners who have taken a public stance (even via social media posts) that criticised lockdown policies and the efficacy of vaccines.

Lawyer Peter Fam, who will also appear at the Reclaiming Medicine conference, said he had spoken with “hundreds” of doctors who were “very terrified” of contradicting the official COVID-19 narrative.

“Generally speaking, there’s only a couple of them who are willing to publicly share any of the things they share in those spaces,” the Sydney-based lawyer previously told The Epoch Times.