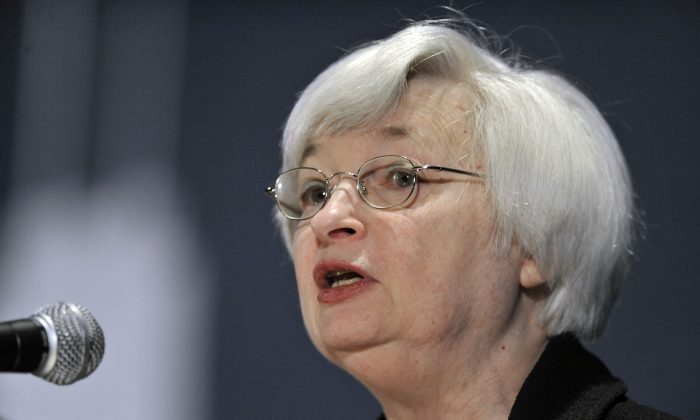 In the end, it’s all going to be ok. At least that’s what the Fed wants us to believe after it tightened its monetary easing program again and first quarter GDP growth came in at a dismal 0.1 percent.

Why is this problematic? Because both the Fed and Wall Street economists have a dismal track record of forecasting economic growth. This time around, consensus, which closely tracks Fed forecasts, was off by 1.1 percent or a factor of 12.

And yet both the Fed and Wall Street are so convinced the economy is going to recover during the rest of the year (they expect 3 percent growth overall), that the Fed comfortably shaved another $10 billion off its monetary easing program, where it buys a certain volume of Treasurys and mortgage-backed securities each month. The amount it buys has now been reduced to $45 billion in total.

Even the weather cannot be used as an excuse for the miss in expectations, as there is a seasonal adjustment process and forecasters knew that the winter was pretty brutal this year.

So apart from the slightly better weather, neither the Fed nor Wall Street could come up with convincing reasons why growth should pick up during the year. This is especially concerning as monetary easing and fiscal stimulus have been pared back.

States and local governments, all starved for money, scaled back spending as federal activity expanded marginally.

Many people will say that they are still printing money, so that should add to economic activity, right?

In fact, this assumption is not true, and even Fed officials have admitted this. When it comes to the dynamics of monetary easing, it is always the change in the flow of money that has the biggest effect and not the absolute amount of easing.

This is because market participants make investment decisions based on the projected availability of new liquidity many months in advance. So if the Fed is reducing liquidity injections, market participants will factor in a relatively lower availability of cheap money relative to their previous assumptions and reduce their risk exposure ahead of time.

Once this adjustment process starts, it will lead to a ripple effect as other players have to react to the ones that move first on the Fed’s decision.

In light of the flagging economic growth and visible and credible sign of a self-sustaining recovery, the Fed is playing a dangerous game. Janet Yellen and her colleagues might be aware of this issue, which could be why they held an emergency meeting Tuesday, the content of which was not disclosed to the public.