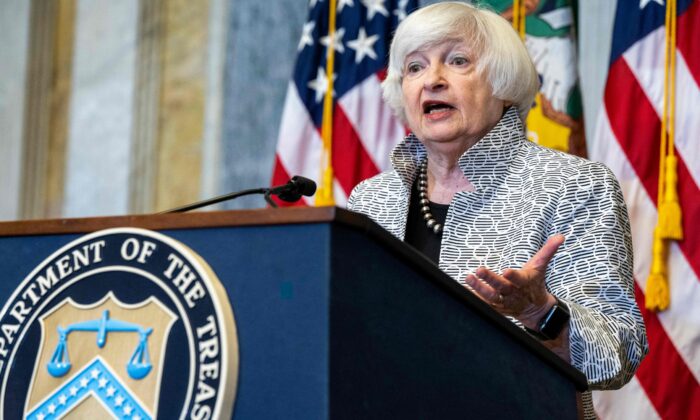 US Treasury Secretary Janet Yellen speaks on the state of the US economy during a press conference at the Department of Treasury in Washington, DC, on July 28, 2022. (Saul Loeb/AFP via Getty Images)
Business Columnists

Recession or Not, Doublespeak Persists

It seems as if we have conflicting reports inside the minds of America’s economic and business elite. While recessions are generally easy to define, this time the powers that be are having trouble.

Are we in a recession or not? Officially, the National Bureau of Economic Research (NBER) committee, which decides and records recessions in the United States, defines a recession as “a significant decline in economic activity that is spread across the economy and that lasts more than a few months.”

Yes, it is true, we have had two consecutive declines in GDP. The Federal Reserve Bank of Dallas reported, on Aug. 2, that the nation’s gross domestic product (GDP) “fell 1.6 percent on an annualized basis in the first quarter of 2022 and was followed by a 0.9 percent drop in the second quarter.”

From that alone we are technically in a recession.

Worse for wear, this recession could have started earlier than calculated, and it could last longer than expected. Dreyfus Mellon Chief Economist Vincent Reinhart, for example, suggested that the NBER could actually count the beginning of the recession at the end of last year.

At the moment, a number of economists are stating this is a different type of slowdown and that there is nothing to worry about. However, despite the fact that this recession may not be filled with economic destruction, the economic data point to a recession.

If that’s the case, then why are there conflicting reports? Simply put, this is not good news for the Biden administration. Adding strife and anxiety to American lives never helps, but neither does headline risk (negative headlines). How can one limit the exposure to headline risk? Ask Wikipedia.

While there is a global consensus on the definition of a recession, it appears that Jay Powell, chairman of the Federal Reserve, agrees with Wikipedia. Last week Powell stated, “I do not think the U.S. is currently in a recession, and the reason is there are too many areas of the economy that are performing too well.” He continued his ambiguity, stating: “We’re not trying to have a recession, and we don’t think we have to.”

Fortunately enough, some are not afraid to speak up. Last week, for example, former Treasury Secretary Larry Summers said, “Jay Powell said things that, to be blunt, were analytically indefensible …. How he could be saying the same thing today, when the inflation rate is where it is, is inexplicable to me. If you think it is neutral, you are misjudging the posture of policy in a fundamental way …. It’s the same kind of, to be blunt, wishful thinking that got us into the problems we have now, with the use of the term ‘transitory.’”

Yet, economists like Paul Krugman and Treasury Secretary Janet Yellen still stood up to support Powell. Despite a GDP decline over two business quarters, Yellen echoed the same. She stated during a press conference last week that “most economists and most Americans have a similar definition of recession—substantial job losses and mass layoffs, businesses shutting down, private-sector activity slowing considerably, family budgets under immense strain,” clearly playing down the current inflation-driven slowdown situation we are in.

She added: “In sum, a broad-based weakening of our economy—that is not what we’re seeing right now when you look at the economy …. Job creation is continuing, household finances remain strong. Consumers are spending and businesses are growing.”

Still, Neel Kashkari, president of the Minneapolis Fed, is scared. He spoke up the other day and relayed some very important data points, stating: “It’s very concerning. We keep getting inflation readings, new data that comes in as recently as this past week, and we keep getting surprised. It’s higher than we expect …. And it’s not just a few categories. It’s spreading out more broadly across the economy, and that’s why the Federal Reserve is acting with such urgency to get it under control and bring it back down.”

Whether we officially have a recession on the books or not, the Fed is taking urgent measures to curb the highest price surges America has experienced in 40 years. That sends a signal: things are not as rosy as they say they are.

In this article, I have included a chart: the Sticky Price Consumer Price Index (CPI), which is calculated from the Federal Reserve and is a “subset of goods and services included in the CPI that change price relatively infrequently.”

Rampant inflation halts investment and growth, and it is common knowledge today that prices have tipped to 40-year highs, stifling growth and turning American daily life upside down.

As work continues toward the Inflation Reduction Act of 2022—which some believe is a misleading name—one can only expect more doublespeak from our government.