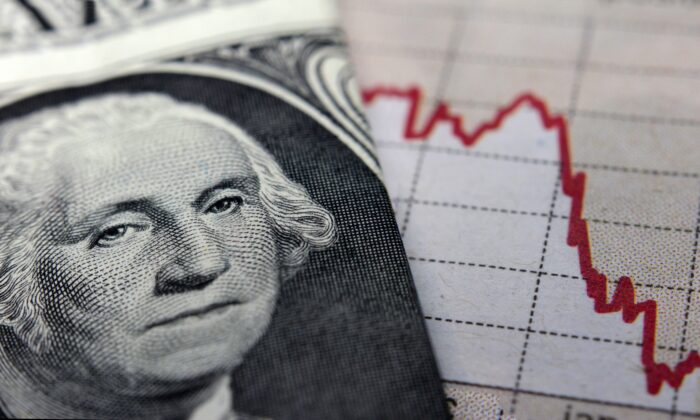 The debate about recession risk is pointless. We’re already in a recession. Real gross domestic product (GDP) in the United States declined at an annual rate of 1.6 percent in the first quarter. The Atlanta Fed GDPNow model shows a 1.5 percent contraction in the second quarter. But the underlying figures are scarier.

According to the Atlanta Fed, “The GDPNow model estimate for real GDP growth (seasonally adjusted annual rate) in the second quarter of 2022 is -1.5 percent on July 15, down from -1.2 percent on July 8.”

Investment is collapsing, consumption is being barely kept alive, and if we look at other components, imports are soaring while exports are rising less than expected.

This is the backlash against massive stimulus packages. An artificial boost to GDP in one year from $2 trillion of excessive spending generated a non-structural rise in GDP that immediately led to a contraction. However, the debt increase remains, and the structural problems are evident.

The labor market is only strong in the headlines. In June, the number of long-term unemployed was unchanged at 1.3 million (pdf). This is 215,000 higher than in February 2020. The labor force participation rate was 62.2 percent, and the employment-population ratio was 59.9 percent. Both remain below February 2020 levels (63.4 percent and 61.2 percent) according to the Bureau of Labor Statistics (BLS). Meanwhile, inflation is eating any wage rises, and real median wage increases are negative in 2022.

Inflation expectations are moderating for the wrong reason: a recession. Although these expectations remain above the levels that we would consider normal (3.4 percent median over three years compared to 2 percent that we would call “normal”), this moderation comes from the correction in those commodities most linked to industrial activity.

Oil and natural gas remain at elevated levels, but have corrected massively in one month, far from the prices reached in March. However, both are maintaining an extraordinarily strong rise so far this year, and the winter effect is clear in the futures curves that continue in backwardation (a positive medium-term price signal). Furthermore, copper, aluminum, and iron ore are down on the year, showing that industrial activity isn’t improving as many expected. The Baltic Dry Index has also corrected rapidly, a signal of cooling off in freight rates. The Chinese slowdown is relevant, but domestic demand in the United States is clearly contracting relative to a year ago.

Consumption is also slowing down due to high inflation and its effect on household disposable income. That’s why it’s key that central banks contain inflation by reducing the amount of money in the system and adapting interest rates to inflation to contain price escalation.

The biggest concern regarding inflation is that core inflation—excluding the energy and food component—continues to advance to figures not seen since the early nineties.

The probability of a recession in the United States has risen to 50 percent according to the Bloomberg consensus, and to 45 percent in the eurozone. However, all metrics point to an evident recession in the private sector. Credit conditions remain strong and, although they’ve recently tightened, they’re far from crisis levels—but certainly equivalent to recession periods.

A severe slowdown implies that rate hikes are likely to end in November, following the U.S. mid-term elections, and that central bank policy will remain accommodative. This would be a double danger because the sticky elements of inflation won’t be truly addressed and the incentive for governments to repeat the failed spending plans will be enormous.

Almost every data point points to the private sector activity being in contraction. June industrial production fell 0.2 percent in June after stalling in May. Capacity utilization fell to 80 percent after being revised down from 80.8 percent to 80.3 percent in May according to the Federal Reserve. All this, even with mining rising 1.7 percent in June after rising 1.2 percent in May due to the high oil and gas demand. The oil and gas sector keeps the manufacturing part of the economy alive.

The U.S. economy has had almost no impact from the Russian invasion. It has extremely limited trade with Russia. Energy prices are elevated, but the United States is energy independent. In fact, it has become one of the largest exporters of liquefied natural gas to Europe, thus saving the European economy from supply cuts.

If there’s a recession in the United States it isn’t because of the Ukraine invasion or external factors, but due to the incorrect inflationist policies implemented during 2020 and 2021. The United States is suffering the hangover of another set of misguided Keynesian policies. Monster government spending and massive monetization of debt have created a mess in an economy that should be leading the world today precisely because of its energy, technology, and labor market advantage.