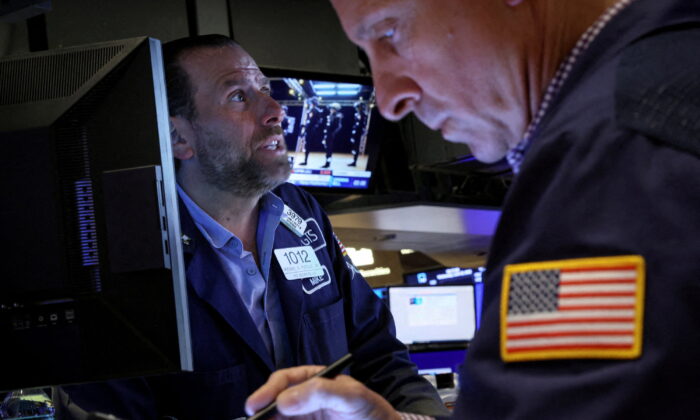 America’s recessionary drumbeat just got louder as a key economic gauge from the Conference Board dropped for the fifth month in a row, weighed down by a slowing job market, weak manufacturing new orders, and deep consumer pessimism.

The Leading Economic Index (LEI) for the United States, which is a forward-looking gauge designed to predict business cycle shifts including recessions, fell by 0.4 percent in July, following a 0.7 percent drop in June, the Conference Board said on Aug. 18.

“The U.S. LEI declined for the fifth consecutive month in July, suggesting recession risks are rising in the near term,” Ataman Ozyildirim, senior director for economics at the Conference Board, said in a statement.

While the U.S. economy met the common rule-of-thumb definition for a recession when gross domestic product (GDP) printed negative for two quarters in a row earlier this year, recessions are formally called by a panel of economists at the National Bureau of Economic Research (NBER). They use a broader definition than the two-quarter rule, relying on a wide range of indicators, including the labor market, which has remained on a relatively solid footing.

The Biden administration has seized on the NBER’s criteria for declaring a downturn, insisting that the economy isn’t in a recession, with White House officials often citing labor market strength—though there are signs that it’s cooling.

Even though unemployment is at 3.5 percent and the latest non-farm payrolls report showed U.S. employers adding a forecast-beating 528,000 in July, a growing number of U.S. corporations have announced hiring freezes or layoffs, while the number of Americans filing for unemployment insurance has been slowly trending up.

The slowing labor market was one of the factors singled out by Ozyildirim in his comments on the LEI’s fifth consecutive monthly slump.

“Consumer pessimism and equity market volatility as well as slowing labor markets, housing construction, and manufacturing new orders suggest that economic weakness will intensify and spread more broadly throughout the US economy,” he said, adding that the Conference Board projects that the U.S. economy won’t grow in the third quarter and “could tip into a short but mild recession by the end of the year or early 2023.”

While the view that America’s recession will be short and mild has its advocates, economist Nouriel Roubini, who got the nickname “Dr. Doom” after correctly predicting the 2007–08 financial crisis, calls that view “delusional.”

Roubini said in a recent interview on Bloomberg TV that he believes persistently high inflation will force the Fed to keep monetary settings tight, which will tip the U.S. economy into a “severe recession and a severe debt and financial crisis” that will be long-lasting.

Similarly, former President Donald Trump recently warned that, unless the country changes course in key areas—including energy policy—he believes something worse than a recession is on the horizon.

“Not recession. Recession’s a nice word. We’re going to have a much bigger problem than recession,” Trump said at a rally in Arizona at the end of July. “We’ll have a depression.”