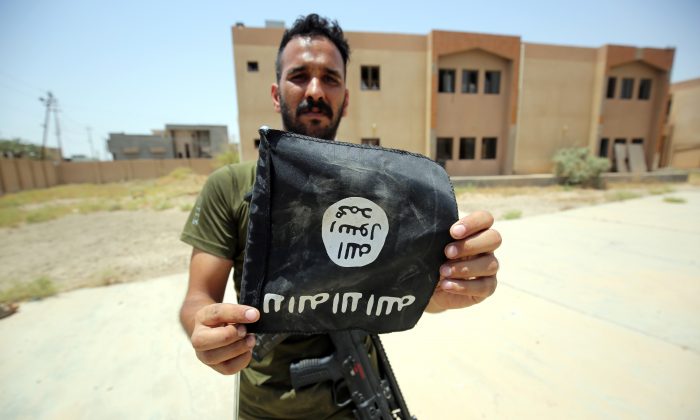 A member of the Iraqi pro-government forces holds an upside down Islamic State (ISIS) flag after recapturing the city from the jihadists in a street in Fallujah on June 30, 2016 (Ahmad al-Rubaye/AFP/Getty Images)
US

He’s now a top commander in ISIS, a radical Islamist terror group infamous for jihadist attacks on innocent civilians across the world.

“He was around here growing up with us,” an unnamed neighbor said, adding that the terrorist’s family usually kept to themselves. “It’s like family here in this neighborhood. … What would make someone go and do that?”

Hoxha was in an ISIS training camp just four days after departing from New Jersey in April 2015 and within six months he was featured in a video beheading captured Kurdish soldiers, reported The Atlantic.

Hoxha is the first American ISIS member confirmed by the government who appears in one of the terror group’s propaganda videos killing someone.

In the propaganda video, which was circulated in May 2017, he called on so-called “lone wolf” terrorists to carry out attacks on targets in America.

“Liberate yourself from hellfire by killing a kaffir (non-Muslim),” Hoxha said in the video as he kneels in front of rocket launchers.

“Are you incapable of stabbing a (non-Muslim) with a knife, throwing him off of a building, or running him over with a car?”

Hoxha’s family is disturbed by Hoxha becoming a terrorist.

“I am upset,” his mother Ltefaji Hoxha told NBC10 at her house in Margate, New Jersey.

Hoxha told the broadcaster that her son stopped talking to her about a year ago, adding: “‘Zulfi is good’ and now he stopped it.”

Hoxha’s family at one time owned Pierre’s Pizza, but doesn’t any longer. The company’s previous connection is hurting their business badly since the news about Zulfi’s terrorism was released.

“I have a family to feed, and this has hurt me a ton because now people think I am connected to ISIS,” current owner Richie Hafizi, who has no relation to the terrorist, told the Press of Atlantic City.

“We’ve gotten calls from people asking for pizza with a head on top of it and other crazy calls.”