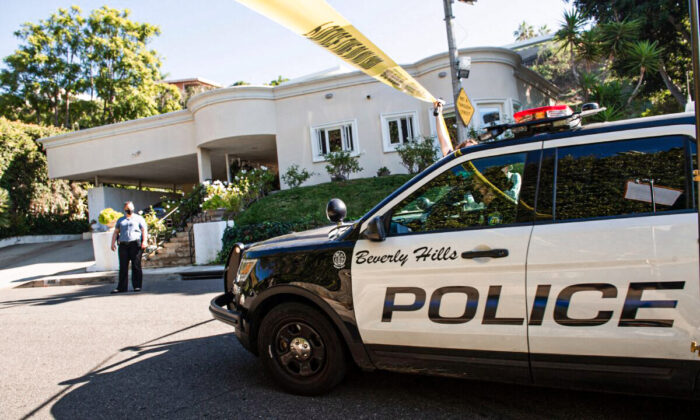 Police tape blocks access to the scene of a burglary and shooting in Beverly Hills, Calif., on Dec. 1, 2021. (Valerie Macon/AFP via Getty Images)
Viewpoints

Enough is enough. Crime is not usually something I think much about, but two murders in the last two months hit too close to home.

Most recent was the senseless murder of 24-year-old Brianna Kupfer from my town of Pacific Palisades. Before that was the equally senseless murder of Jacqueline Avant, the mother of my friend’s childhood friend. Both were women allegedly killed by black males with long rap sheets. I would normally never note the race of the individuals involved, because it is typically not relevant. But when our leaders embark on crime policies designed to be more “equitable,” race is at the center.

Los Angeles District Attorney George Gascón has been clear that he is “committed to making our communities more safe and more equitable.” Put simply, “more equitable” means finding ways to prosecute fewer minorities. To the left, these minority groups are the true victims, of so-called systemic racism.

Mayor Eric Garcetti subscribes to the same line of thinking. In response to the 2020 George Floyd protests and absurd calls from Black Lives Matter to defund the police, Garcetti and the city council cut $150 million from the LAPD budget, handing the money instead over to leftist experiments like guaranteed income handed out to residents via a lottery.

Thanks to the defunding, Los Angeles now has 500 fewer officers than in 2019. It also has a demoralized police force which clearly does not have the support of City Hall. To city leaders, the criminal is the victim and the police are the culprits. The response of many officers has been to retreat from crime fighting. This is only natural since the more aggressively they fight crime, the more likely they are to be accused of brutality or being racist.

Los Angeles just released its 2021 crime statistics and, not surprisingly, they show increases across the board, with homicides up 94 percent over 2019. The numbers came as no surprise to Angelenos who have been seeing and feeling the change. Even less surprised was no doubt Garcetti and Gascón since their policies are what led to the increase.

Gascón, who took office in December 2020, was previously the San Francisco district attorney where he masterminded Prop. 47, which converted a host of crimes from felonies to misdemeanors in California. Steal less than $950 and you face only misdemeanor charges. Oh, and his office did not prosecute 60 percent of misdemeanor crimes it was presented!

The result? The city saw a 49 percent increase in property crimes. He also effectively ended the requirement of cash bail in San Francisco, making it easy for those charged with crimes to remain on the street and commit more crimes.

Seeing that reelection was likely not in the cards, he resigned early to instead run for Los Angeles district attorney. Neither the San Francisco mayor or city attorney, his fellow Democrats, endorsed Gascón, supporting his opponent Jackie Lacey instead. Gascón’s reputation so preceded him that the Los Angeles Police Protective League donated a million dollars to a political action committee that supported Lacey’s campaign.

But this was not near enough to offset the millions Gascón, born in Cuba, received from the far left. His top supporter was George Soros who, through his “Open Society” foundation, donated $2.25 million. (No, Soros does not live in Los Angeles, he is from Hungary and lives in New York.) Also coming up with over $2 million was Netflix CEO Reed Hastings and his wife. (No, they also do not live in L.A.—they live in Santa Cruz.)

With the benefit of their money, the white male Gascón defeated the incumbent black female, Lacey, and Angelenos unwittingly elected Gascón—most having no true concept of his plans.

He immediately announced that he would not seek cash bail for numerous offenses and would release those currently awaiting such bail. He also said he would never seek the death penalty (despite it being the law in California), and would end charging juveniles as adults. He also announced he would reevaluate all sentences of prisoners having served over 20 years. And, of course, he continued his policy of ignoring smaller crimes.

He quickly became so unpopular in Los Angeles that he faced recall efforts in his first year, led by family members of crime victims. The supporters sought to “reverse his anti-crime victim/pro-criminal policies, and provide hope for the millions of law-abiding people living in Los Angeles County—citizens who, because of DA Gascón, today feel less safe.” And that was before this month’s murders.

There is a reason that the Lady Justice statue in front of the Supreme Court is blindfolded. Justice should be colorblind. That means “equality” whereby all are treated the same, not “equity” whereby the government measures everything by race and is obsessed with equal outcomes. Angelenos are paying with their lives for this woke, leftist utopia approach to fighting crime.