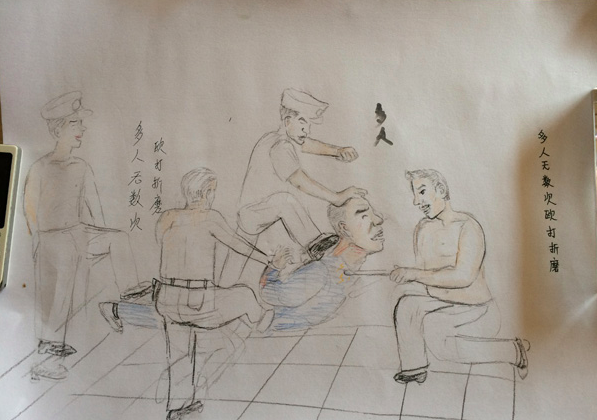 Drawing of police officers stepping on a prisoner's back, pulling his hair, and shocking his neck with an electric baton (Screenshot via Xinhua News Agency).
China

Alarming drawings of police torture in Chinese prisons—including images of police dumping boiling water on a prisoner and electrically shocking him as he hangs from the ceiling—have recently grabbed the public’s attention, according to a New York Times report.

But the depictions, sadly, are nothing new. They are consistent with other images produced over the years by those who’ve suffered extreme torture, hoping their graphic illustrations would raise awareness about abuse in Chinese prisons—abuse often suffered by innocent prisoners of conscience.

The man depicted in the cartoons that ran in the New York Times is Liu Renwang, a 53-year-old resident of Shanxi Province.

Liu had been wrongly convicted for fatally shooting a village official in 2008 after police from the Zhongyang County Public Security Bureau tortured him repeatedly to extract a confession. Initially sentenced to death in 2010, his sentence was suspended, and in 2012 he was given a life sentence. In 2013, the court overturned the verdict and declared him innocent.

With the drawings, Liu hopes to spread awareness about how Chinese authorities use torture in interrogations. He also seeks nearly $1 million (about 6 million yuan) in compensation from the Lüliang Intermediate Court.

After The Paper, a state-run, Shanghai-based publication, reported on his story, the state’s official mouthpiece Xinhua News Agency and other outlets, also published similar reports—making it the first time major state-run media have reported on images of torture.

It’s unclear why the state media suddenly published torture images given how many others exist. They have appeared over the years in human rights reports, foreign media articles, and ex-prisoners accounts to show the reality of systemic police torture.

In particular, practitioners of Falun Gong, a peaceful meditation practice persecuted by the Chinese regime, have documented the numerous forms of torture they are subjected to in Chinese detention centers—many the same as Liu’s plus a litany of others.

Practiced widely in China, Falun Gong promotes health through several gentle exercises and supports a lifestyle centered around the moral tenets of truthfulness, compassion, and forbearance. But due to its overwhelming popularity, then-leader Jiang Zemin launched a nationwide persecution of the practice in July of 1999.

Since then, Falun Gong followers have been routinely imprisoned, tortured, and even killed as police torment them physically and psychologically to sign papers disavowing Falun Gong.

Many practitioners have recounted their stories to artists who have then documented them in various forms from cartoon-like drawings to meticulous oil paintings. Minghui.org, a website dedicated to exposing the persecution, has compiled dozens of these illustrations.

The Chinese regime has severely tortured dissidents, activists, and religious believers with a wide range of destructive or humiliating torture methods with little regard for international human rights laws.

At Masanjia prison, practitioners spoke of how police officers used electric batons to shock women’s genitals and breasts and humiliate them.

Artists who have been tortured for practicing Falun Gong have also created more sophisticated forms of art to expose state brutality. The Art of Zhen, Shan, Ren International Exhibition showcases several masterpieces depicting the persecution with many works painted by artists personally tortured in the crackdown. The exhibition has toured to over 900 cities in 50 countries over the past decade and received critical acclaim by audiences worldwide.

Professor Kunlun Zhang, one of contemporary China’s most accomplished sculptors, became a prisoner of conscience for practicing Falun Gong. In one particularly cruel form of torture, he was forced to squat day and night in a cage without moving or speaking. After being released from prison, he overcame the trauma through artwork, coordinating the Art of Zhen Shan Ren International Exhibition.

In addition to illustrations, paintings, and sculptures, some Falun Gong practitioners have even turned to live anti-torture exhibits mimicking torture scenes on city streets around the world.

Through different art forms, victims of torture in China still strive to bring the Chinese regime’s cruelty to the attention of indifferent or uninformed Chinese people and the international community.