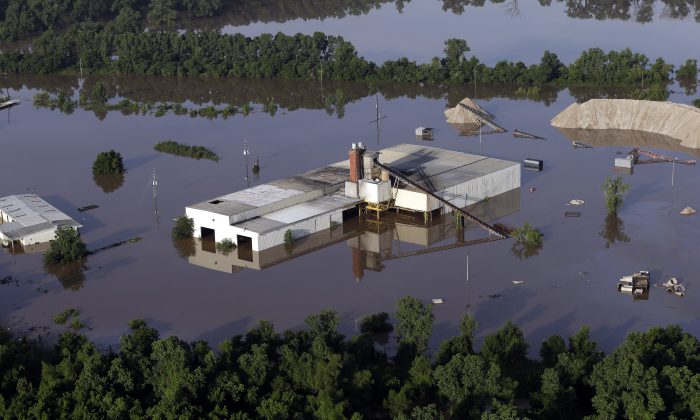 In this aerial photo, a business is flooded near the Brazos River Saturday, May 30, 2015, in Sugar Land, Texas. (AP Photo/David J. Phillip)
US

SUMMERTON, S.C.—The pungent stench of mildew greeted Asiah Lewis when she came home to her apartment, her footsteps making squishing sounds on the carpet as she picked through soggy clothes piled on a bed and a lifted a moldy shoe from the floor.

Three days after Lewis, her four children and her mother fled the Meadowfield Apartments in chest-deep floodwaters, she returned Wednesday only to realize that — for now, at least — her family is homeless.

“I’ve got some important documents in the closet I need,” said Lewis, 28, who grew up in the same three-bedroom apartment in which she had been raising her own children in Summerton, a tiny town 30 miles south of Sumter. “Pictures on the walls we’re going to try to get. Other than that, it’s a loss. Now I’m basically going to have to start over with four kids.”

Record rainfall in South Carolina last weekend sent floodwaters gushing through Lewis’ door and seeping through the walls of her apartment before dawn Sunday, when she awoke to firefighters knocking at her door telling her to leave. On Wednesday, Lewis was among 205 people still sleeping on cots at a high school gym serving as a Red Cross shelter. About half of those were her neighbors from Meadowfield.

As floodwaters recede across the state, residents are coming home to the heartbreaking reality of just how much they have lost.

“Everything is gone!” Wendy Dixon wailed, bursting into mournful sobs as she and her husband returned to their apartment in Columbia. “My clothes and all can be replaced. But my little things, my pictures, are all gone.”

Dixon realized her wedding album and dozens of photos of her two sons and three grandchildren had been destroyed when muddy floodwaters swept through her apartment Sunday. She and her husband, Mike, had just moved there in June and her photos were still in boxes on the floor when the flood hit.

The couple has been staying at a shelter at a Columbia middle school.

It could take until the weekend for the threat of flooding to ease. U.S. Sen. Lindsey Graham warned of a potential billion-dollar cleanup bill and the University of South Carolina moved its home football game against LSU some 700 miles away to Baton Rouge, Louisiana.

In another image of the storm’s otherworldly toll, state officials said caskets have popped out of the ground in 11 instances in six counties.

South Carolina’s top agriculture official said he estimates the state may have lost more than $300 million crop losses in recent flooding. Commissioner Hugh Weathers said he flew over flooded areas several times this week and met with state and federal agriculture officials to begin assessing the damage. He said his initial estimate is conservative and could rise.

At least 19 people in South Carolina and North Carolina have died in the storm.

Residents of Summerville, northwest of Charleston, are wondering how long it will be before their lives return to normal. Dorchester Road, a main thoroughfare, remained impassable Wednesday in some spots. Amanda Perez and other residents used canoes and stand up paddle boards to assess the damage to their homes.

My house “is smelly. And, it’s wet. And, even though it’s showing some improvement today, I know I’ve lost at least two cars,” Perez said. “How am I going to fix this? How am I going to get my kids to school? My cars are under water.”

In Summerton, Dottie Carter, the apartment manager of Meadowfield Apartments, told returning residents they have until Friday to remove any belongings they can salvage. After that, everything left behind will be thrown out so crews can clean up and repair the flood damage.

How long that will take, nobody knows.

Meanwhile, Summerton Mayor Mac Bagnal said officials are looking for another place for evacuees to stay if they have no friends or relatives nearby. Local officials plan for classes to resume Monday at Scott’s Branch High School, where the local shelter is now.