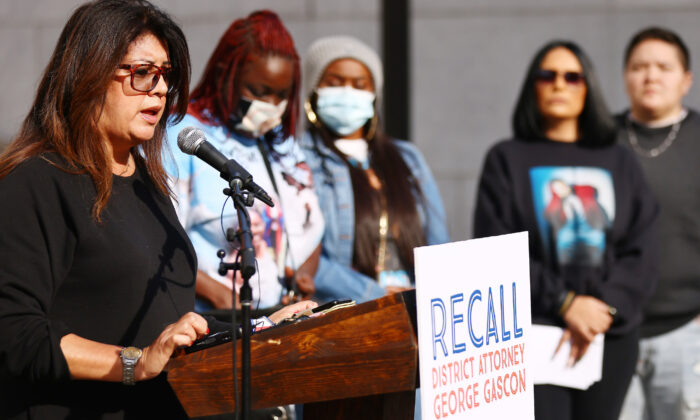 LOS ANGELES—The Recall George Gascón campaign passed 450,000 signatures with 50 days left to qualify for the general election ballot in November, organizers announced on May 18. The campaign needs 566,857 signatures from registered Los Angeles County voters, or 10 percent of the total current registered voters, by the submission deadline on July 6.

“With 50 days to go, we are continuing to see increases in signature collection and anticipate additional bumps as our mail program is fully deployed,” recall organizer Tim Lineberger said in a statement May 18.

“We are on the cusp of qualifying this recall and positioned exactly where we need to be to hit our goals within the remaining timeframe. If residents and community leaders continue to step up, this will be the beginning of the end of George Gascón’s reign of terror over Los Angeles.”

Gascón, elected in December 2020, introduced a slew of “bold steps” to reform the criminal justice system, such as: no longer charging minors as adults; eliminating many sentencing enhancements, including firearms; ending the death penalty in LA County; removing cash bail for misdemeanor or nonviolent felony crimes; and holding accountable law enforcement officers who violate the law.

Critics of these policies say it has only increased crime, pointing to recent statistics from the Los Angeles Sheriff’s Department that show a 94 percent jump in homicides between 2019 to 2021, and a 54 percent increase in auto theft.

The Public Policy Institute of California also published findings showing a 17 percent increase in violent crime in both Los Angeles and San Francisco in 2021.

Meanwhile, Gascón held a press conference on the same day calling for stricter gun control laws in the county to deter violent crime.

“Gun violence continues to be a major public health problem in our country. The violence is driven by many forces, which our elected leaders have the power to address, but most refuse because it is complicated, requires real work, and commitment to unity and the greater good,” he said.

More than 30 cities in Los Angeles County, including Torrance, Santa Clarita, Lancaster, and Beverly Hills, support the recall, with more than a dozen passing votes of no confidence against Gascón’s policies.