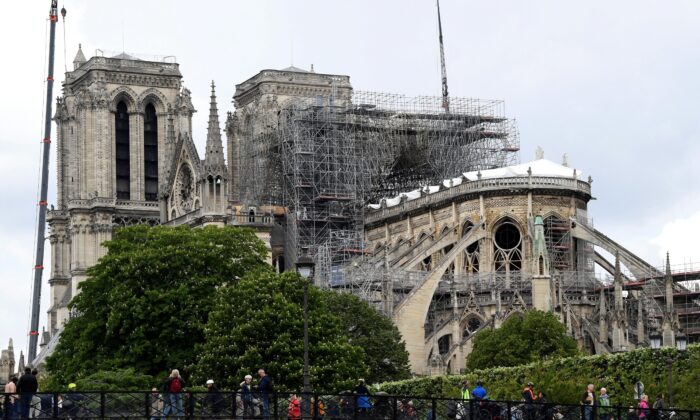 Cranes and scaffolding are seen at the Notre-Dame de Paris on May 10, 2019, as stabilization work continues in preparation for reconstruction to begin after the cathedral was badly damaged by a fire the previous month. (Bertrand Guay/AFP via Getty Images)
Viewpoints

Rebuilding Notre-Dame: Something Significant Is at Stake

Here’s some bad news: When an iconic 800-year-old wood, stone, and whatever-was-handy cathedral was engulfed by a catastrophic fire, the structure was severely compromised. And here’s some worse news: They’re thinking of giving it an update.

I refer, of course, to Notre-Dame de Paris, the “tourist attraction” that burned disastrously in April 2019. And according to Philip Kennicott in a long piece in the Washington Post, the sort of update being considered is one akin to the “iconic” pyramid with which the iconic I.M. Pei defaced the iconic Louvre. Which has led to an overheated debate about the overheated church.

French President Emmanuel Macron suggested building a “contemporary” spire atop Notre-Dame. Which led Philippe Villeneuve, the chief architect for France’s historic monuments service, to threaten to resign before allowing such a desecration. Which led Gen. Jean-Louis Georgelin, the head of the commission on what to do with the church, to tell Villeneuve to “shut his gob” or the French equivalent thereof (namely, “qu’il fermer sa gueule”).

One is tempted to mock such a petty exchange at the risk of joining in. But I’m pleased that tempers rather than temperatures are running high, because I think the subject is an important one on which people should have strong opinions. As I do myself.

In my mind, “contemporary” is an architectural term meaning ugly. Not always hideous, though it surprisingly often is. Sometimes, just dreary. But those ads for river cruises always offer to show you old stuff and the countryside. Nobody would pay money to see a modern city.

Once in a while, someone gets an artistic inspiration, and it gets worse fast. Like Michael Lee-Chin’s carbuncle on the venerable Royal Ontario Museum in Toronto, looking as though the Blob had attacked the building after engulfing a bunch of International Style practitioners.

Admittedly, the ROM itself is a bit of a carbuncle, built in Early 20th-Century Ponderous (inspired, so to speak, by Neo-Romanesque). Like Canada’s Supreme Court building, the very stones reassure us that there is nothing frivolous or even easy-going about the occupants, and the structure will under no circumstances rise into the air.

For all its sternness, the original ROM wasn’t deliberately ugly and had become a solid, reliable piece of downtown Toronto culture. Whereas the only redeeming feature of the “Deconstructionist” addition is that function didn’t follow form because it leaked and threatened to let in too much light, damaging the exhibits, proving it was a terrible idea.

Meanwhile, back in Paris, as Kennicott rightly notes, Notre Dame has been undergoing changes from the time it was first “completed” in 1260 and immediately modified. Indeed, Hugo’s famous novel revived interested in the then-crumbling, recently desecrated structure, leading to a renovation that added a bunch of gargoyles everyone thinks are medieval, plus decorations, statues, and a spire to replace one removed 200 years earlier before it fell on everyone’s heads.

The thing is, back then they still knew how to work respectfully within a tradition. As English art critic John Ruskin said, there’s nothing wrong with borrowing if you pay interest. But now, it seems they’ve forgotten. Even though the French Parliament insisted in July 2019 that the cathedral be restored exactly as it looked before the fire, they can’t stop fantasizing about ghastly modern touches.

The essential problem is the paradox, itself now venerable, that Notre-Dame is a traditional religious symbol of a militantly secular modernist France. The Jacobins whitewashed it into a Temple of Reason. But Napoleon was crowned there, many French presidents’ funerals happened there, and when Paris was liberated in 1944, they celebrated with a Magnificat. Because you need to say something at a time like this. As when somebody dies.

When Notre-Dame caught fire, everyone knew it had to be rebuilt, and rebuilt as a church because it is a church. But they can’t resist rebuilding something other than a church because of novelist John Barth’s quintessential modernist, “if somebody built the Chartres cathedral now, it would be an embarrassing piece of real estate, wouldn’t it? Unless he did it ironically.”

Macron et al. can understand this sentiment and even feel uneasy about it. But the embarrassment remains and hence the urge to do it ironically, because the faith that built the original, and the inherent link between that faith and that style, is now inaccessible to you. We’d be lucky if all they added was a minaret.

That a furious argument has erupted is proof that people realize something significant is at stake. Unfortunately, it’s taking place in a nation that can’t even remember why it once built a church, let alone feel a simple, earnest desire to do so again.