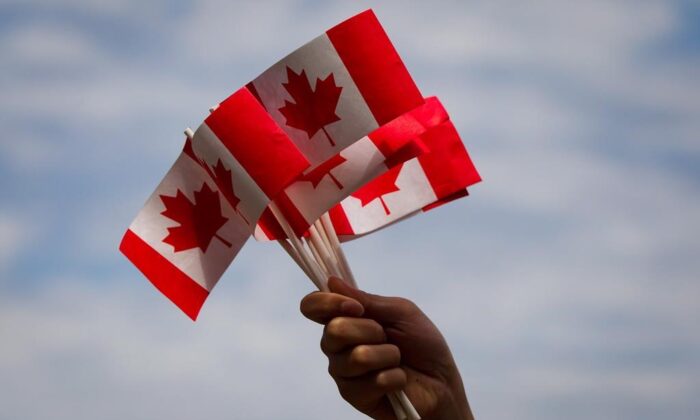 The Canada Day celebration in Winnipeg for July 1, 2022, has been rebranded "New Day," with no fireworks. (The Canadian Press)
Canada

Rebranding of Canada Day in Winnipeg in the Name of Reconciliation Regrettable: Critics

The Canada Day celebration in Winnipeg has been rebranded “New Day,” a move some academics and a retired Manitoba judge say represents a regrettable milestone for Canada.

The Forks North Portage Partnership, which manages historic site The Forks, where the annual Canada Day festivities are held, announced the change in a statement.

“We acknowledge the anger and hurt indigenous communities are feeling, and we know we have a role to play in the healing process,” said CEO Sara Stasiuk. “We’re beginning by listening to what we heard, and by offering a day that focuses on sharing space, telling stories, and building understanding.”

The decision was so divisive that the board of directors issued a subsequent statement on The Forks’ home page.

“Controversy has arisen over the plans for a reimagined Canada Day at the Forks. This new day of programming, developed by management and fully supported by the Board of Directors, represents Canada Day as a new and important day where everyone can participate in many rich multicultural experiences,” the statement reads.

“The Forks never intended to minimize or eliminate the idea of Canada Day but use it as an opportunity to reimagine how we recognize and celebrate the day together. … We are mindful that this nation’s ideal is a work in process that requires reconciliation with Indigenous Peoples and an ongoing commitment to the cultural fabric that makes Canada such a unique and evolving country.”

The statement noted that fireworks have been “paused” this year, a decision that will be reviewed for 2023.

University of Winnipeg political science professor Malcolm Bird says cancellations like these are the predictable extension of those who want to cancel Canada.

“The renaming of Canada Day festivities at The Forks is the natural end result of a culmination of events and movements that we have been witnessing over the last five or so years. All the criticism of our societal, economic, political, and family institutions [is] by the woke progressive left,” Bird told The Epoch Times.

“[It’s] perhaps best illustrated by our PM claiming that Canada had committed ‘genocide’ against indigenous people. [This] naturally leaves us with no basis to celebrate our country and its founding. How could you possibly celebrate a country that has [committed] or is committing genocide?”

Bird believes the shaming of mainstream Canadian culture ironically represents an import of leftist politics such as that in the United States. He says Quebec seems to be the only place in Canada where people fiercely celebrate their European culture.

“Canadians will also need to rethink our national holidays. What is the point of Canada Day? Similarly, what is the point of the new September 30th date? Are we proud of this country that we’ve made or not? We can still be proud and recognize its flaws and failings at the same time—we just can’t and shouldn’t write off the whole thing.”

The Sept. 30 National Day for Truth and Reconciliation was created by an act of Parliament on June 3, 2021. The day acknowledges those who attended residential schools, their families, and their communities, and coincides with Orange Shirt Day, which has a similar purpose.

Some high-profile Winnipeggers have spoken out against the decision by The Forks. Former federal Liberal cabinet minister Lloyd Axworthy told the Winnipeg Free Press that the decision is “out of focus.”

“I think it’s a decision that really needs to be revised and reconsidered because I think right now more than ever, I think Canada needs a Canada Day,” Axworthy later told the CBC.

“On July 1st, I will be proudly celebrating Canada’s birthday because I love my country unconditionally. I guess I can’t do that at the Forks because I’ve recently learned that it’s canceled,” she wrote.

On July 1st, I will be proudly celebrating Canada's birthday because I love my country unconditionally. I guess I can't do that at the Forks because I've recently learned that it’s canceled.
PS – I'm currently accepting invitations to all actual Canada Day parties.#canadaday pic.twitter.com/snHDJswCqf

Retired Manitoba provincial judge Brian Giesbrecht, a senior fellow with the Winnipeg-based Frontier Centre for Public Policy, says he will party on.

“When Canada Day arrives I plan to celebrate it proudly, and I definitely don’t intend to hide it behind a wimpy name like ‘A New Day’ or some other weak imitation. I’m proud of my country, warts and all,” Giesbrecht said in an email.

“Canada Day recognizes the great things that Canada has done, but also the mistakes we have made along the way. … So let’s not be ashamed of Canada Day. We are nowhere close to perfect, but we are trying. There is no need to hide our warm feelings for this great country. No need to lower our flags. Canada Day is for all Canadians.”

“The cancellation and renaming of Canada Day may seem like a silly and inconsequential thing, but it reflects a kind of cultural self-hate that has gripped the body politic in Canada,” Pardy told The Epoch Times.

“Our institutions have embraced the premises of critical theory, an anti-Western ideology that insists that Canada and other Western nations are fundamentally unjust, systemically racist, oppressive, and destructive,” he said, adding that the “most serious threat to Canada” may be “its conditioned disgust with its own history and traditions.”