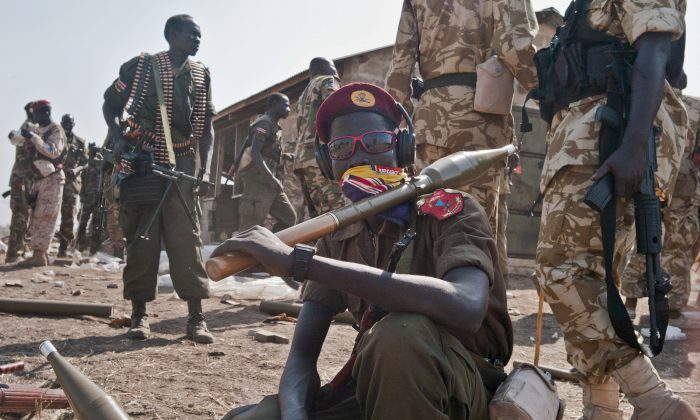 In this Monday, Jan. 13, 2014 file photo, South Sudanese government soldiers wait to board trucks and pickups, to head to the frontlines to reinforce other government forces already fighting rebel forces near the town of Bor, as they prepare to leave from the outskirts of Juba, South Sudan. (AP Photo/Jake Simkin)
Africa

JUBA, South Sudan—Rebels in South Sudan said Thursday they have seized U.N. river barges they suspect are transporting weapons for government troops, and are holding 16 peacekeepers and others who were aboard them.

The barges were taken along the White Nile in a disputed area in the volatile state of Upper Nile.

James Gatdet Dak, a spokesman for rebel leader Riek Machar, said the barges were seized but did not specify how many.

Two government soldiers, three officers of the national security agency, and six barge technicians were also detained, said Nyagwal Ajak Dengkak, a spokesman for a rebel commander who controls the area. Rebel forces are taking “tough action against our enemies captured including U.N. soldiers currently disarmed and jailed for the world to know the truth of conspiracy between” the South Sudanese military and the U.N. mission, he said in a statement.

The U.N. troops in detention will be treated “like criminals,” he said.

The barges were seized at Kaka, a settlement on the rebel-controlled west bank of the river. The east side, where the U.N. mission has bases, is held by government troops.

Ariane Quentier, a U.N. spokeswoman, said the mission is dealing with the situation.

Related Coverage
Is It Time for South Sudan and Sudan to Reunite?

Tens of thousands of people have died in South Sudan’s civil war and over 2 million are displaced, according to the United Nations.

African Union investigators said in a report released Tuesday that they discovered atrocities by both sides in the conflict, including testimony of forced cannibalism and the discovery of mass graves.