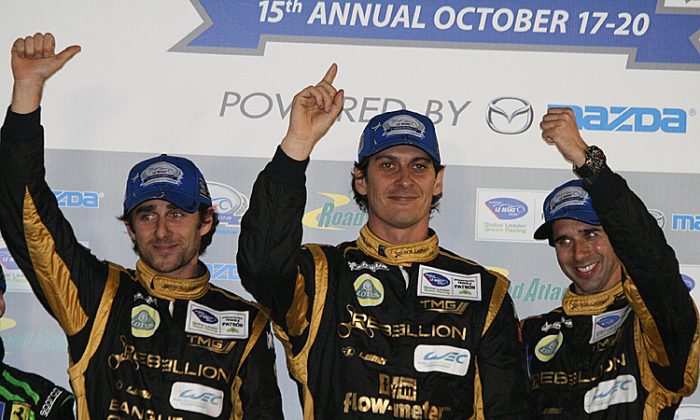 The 2011 ELMS P1 and 2012 WEC P1 privateer champions added the 1,000-mile North American race to their résumés. The Swiss-based team completed the distance in nine hours, 41 minutes. The team faced tough competition early on from the Muscle Milk Pickett Racing HPD, which took the lead after Rebellion”s first pit stop, but then collided with a slower car and lost an hour in the pits.

The Rebellion car circulated swiftly and safely, staying on track and away from traffic to score the win which makes them the most successful P1 privateer team in any series in the world.

The drivers said the race was tough, initially because of the pressure from the Muscle Milk car, and constantly because of the traffic and the unforgiving nature of the course compared to most European circuits.

“I think the start was the toughest part of the whole race,” Neel Jani told the post-race press conference. “It was a big fight with the Muscle Milk car on my tail. They got us in the pit stop, so I thought, ‘I will just run my race in traffic and do my speed.’ It looked like he made a bad move in traffic and we got around them.”

“The track is very different, you pay the price for any error,” explained Nicolas Prost. The walls are much closer, you go off here and it’s against the wall. It is a risk taking thing in the traffic. Success is about how much risk do you want to take, the answer to the question today was not too much.”

Unfortunately the anticipated battle between the race’s P1 titans failed to materialize, as the Muscle Milk Pickett Racing HPD-Honda lost an hour in the pits repairing damage from collision after only an hour of racing. The team still won the ALMS P1 championship, as its main competition, the #16 Dyson Racing Lola-Mazda hybrid, lost even more time with electrical and other problems.

Scott Tucker, Luis Diaz, and Christophe Bouchut won both the P2 class of the race and the ALMS P2 championship with their second-place finish. Level 5’s toughest competition, Conquest Endurance, finished third, only eight seconds behind the Level 5 car. The Conquest entry was later disqualified because one of the team’s drivers exceeded the maximum driving timet.

The DeltaWing finished sixth overall, running a trouble-free, collision-free race. The long caution periods negated any advantage the car might have gained through greater efficiency, but the car still survived ten hours without difficulty.

Alex Popow, Ryan Dalziel, and Mark Wilkins finished first in LMPC, seventh overall in the #06 Core Autosport Oreca. The car was not the fastest in the field, but the driving team made no mistakes.

Extreme Speed Motorsports won GTE-Pro, beating both Corvettes, both BMWs, both Vipers, the AJR Lotus, and a host of Porsches. Drivers Scott Sharp, Johannes van Overbeek, and Toni Vilander started from the pole and battled hard throughout the race, to finish 30 seconds ahead of the #4 Corvette.

Visiting ELMS team IMSA Matmut Porsche won GT Am. The driving team of Anthony Pons, Raymond Narac, Nicolas Armindo focused on staying on the track and out of trouble; the only other car in class, the AF Corse Ferrari, had an accident and other issues and only completed 162 laps.

GTC was a tough ten-hour battle, which the pole-sitting Alex Job Racing Porsche seemed to be winning until the #30 NGT Porsche of Henrique Cisneros, Jakub Giermaziak, and Mario Farnbacher took the lead in the final hour of the race.