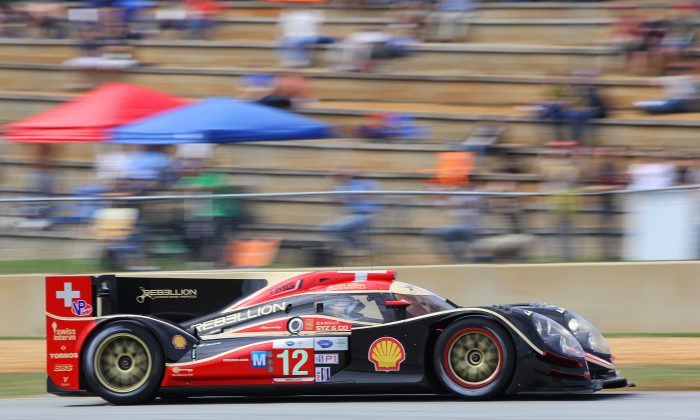 BRASLETON, Ga.—Rebellion Racing’s Neel Jani gave his team the best possible start for its defense of its 2012 season-ending win. Jani turned in a lap of 1:09.254 during Friday’s qualifying session to put the Rebellion #12 P1 Lola B12/60-Toyota on the pole for Saturday’s American Le Mans Series Petit Le Mans.

Saturday’s race is ten hours or 1000 miles long, whichever comes first—that’s a lot of time for a lot of things to happen. Muscle Milk might have a great race set-up while Rebellion might have focused on qualifying. Jani realized that having a second in hand didn’t guarantee a win.

“It’s nice to be back racing in America, because we have a fight again the Muscle Milk,” Jani said at the post-qualifying press conference.

“We have seen many times in qualifying we have been quicker—I think we have beaten them every time this year, whenever we were fighting each other, but the race is just a different game,” he continued. “Especially in America, with the GTCs and the safety cars. The visibility in our car is a bit difficult in traffic, while the open car is better—with everything adding up, that means the race is always close.”

Rebellion contested the first part of the season, trading wins with Muscle Milk. Luhr and Jani went head-to-head—and door-to-door—at Mazda Raceway Laguna Seca, with the Muscle Milk car surviving and wining, while the Rebellion Lola had to pit with damage.

“I still think Laguna was one of the most fun races I ever had in my sports car career so far—unfortunately not with a good end,” Jani said with a wry chuckle. “Hopefully tomorrow we will have a great race like at Laguna, but with the win on our side.”

The P2 pole went to the second fastest car in the field.

David Brabham, called in to drive for Extreme Speed Motorsport for this race, inherited the pole from Ryan Briscoe in the #551 Level 5 HPD ARX-03b. Briscoe set a time of 1:12.490, then stopped on the track with a mechanical problem, which brought out a red flag, stopping the session with less than a minute left. ALMS rules take the quickest lap away from drivers who interrupt sessions, so Briscoe’s best time was deleted.

Brabham has driven in ALMS since its inception, twice winning the P1 championship with co-driver Scott Sharp at Highcroft Racing. In 2011 Sharp left Highcroft to open ESM, and when he needed a driver for the final Petit Le Mans, he called on Brabham, who had been on vacation for several months.

“I haven’t driven since March so I was still blowing the cobwebs out,” Brabham explained. “I slotted in with the team really easily, they really helped me.

“Obviously, we were a bit lucky with Ryan’s lap, because he was a little bit quicker but we were very close. I think that’s important for the team—you can see it’s given the team a big lift, and that is always a good thing going into a 1000-mile race. We have a good race set-up; all the drivers are comfortable with it.”

ESM and Level 5 will be racing for the championship Saturday. Level 5’s Scott Tucker, who co-drives with Ryan Briscoe, has a six-point lead over Sharp.

“Level 5 is very strong, we know that, we respect that,” said Brabham. “They have great drivers and a great organization. In race trim it’s going to be a hell of a race.

“There is a lot at stake, a championship for the drivers, I’m just happy to be involved.”

Brabham also commented on the passing of an era—ALMS, which started with the first Petit Le Mans in 1998, has merged with Rolex to form USCC. The 2013 Petit Le Mans will be the final race run by ALMS.

“For me [being at the last ALMS race is] very important; it is very emotional,” Brabham told the assembled press.

“This championship has been a big part of my life. I’ve had some of my best racing of my career here in the U.S. What I’ll miss the most is the people, not just the racing. I’m talking about the people in the paddock, the fans, and the way everybody got involved in the series and brought it to new levels every year. I have seen that progression and been part of it, and feel blessed.

Brabham exchanged a quick word with Neel Jani who sat beside him. “We’ve raced together in WEC,” Brabham continued, indicating Jani, “and it is an entirely different ball game. For me this is the most enjoyable part of my racing, racing here in the ALMS.”

Pole in GTE went to Matteo Malucelli in the #62 Risi Ferrari, who posted a time of 1:18.861, three-hundredths quicker than Jonathan Bomarito in the #93 SRT Viper GTS-R. Bomarito’s team mate Marc Goosens qualified third in class, .13 seconds slower. The top seven cars in the class are within .53 seconds of the Risi Ferrari, so GTE will once again be a terrific battle between Ferrari, SRT Dodge, Corvette, BMW, and Porsche.

Jan Magnussen and Antonio Garcia in the #3 Corvette lead the class with 125 points, with BMW’s Dirk Müller next with 109. The #3 Corvette qualified fourth, .27 seconds off the pace of the leader, while Müller qualified fifth, a further tenth back. It will be an interesting contest.

Dane Cameron in the #51 PR1 Mathiasen Motorsports Oreca FLM09 took the PC pole with a lap of 1:14.955, 0.17 quicker than Bruno Junqueira in the #9 RSR Racing Oreca. Cameron and co-drivers Mike Guasch and David Cheng need to finish fourth or better to win the class championship Saturday.

Spencer Pumpelly captured the GTC pole in the #45 Flying Lizard Porsche, lapping .32 seconds quicker than Jeroen Bleekemolen in the #22 AJR Porsche. Bleekemolen and co-driver Cooper MacNeil lead the class with 131 points. Pumpelly and co-driver Nelson Canache Jr. are third, each with 115 points. The Lizards will need a lot of luck to take the title, but ending the season with a win would ease the pain of finishing behind in points.

The 16th and final American Le Mans Series Petit Le Mans takes the green flag at 11:30 a.m. Saturday, Oct. 19. Tickets can be purchased at the gate or online at RoadAtlanta.com.

The race will be televised on Fox Sports 1 and 2, and online (if all goes well) at ALMS.com. (All times EDT.) Live timing and scoring are also available on ALMS.com.