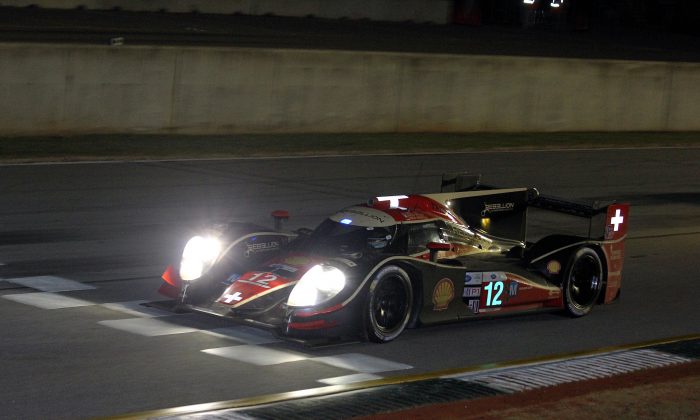 In 2012, Lucas Luhr in the Muscle Milk HPD hit a GTC Porsche near pit-out in the race’s opening hours. Luhr was perhaps being a bit overaggressive, but the GTC driver could have made room for the much faster car. Either way, Muscle Milk retired and Rebellion took home the trophy.

Rebellion’s year went much differently. After beating Muscle Milk at Sebring, the team lost at Long Beach as Muscle Milk made a strategic early driver change under caution. Muscle Milk then won at Laguna Seca after Luhr and Rebellion driver Neel Jani collided while contesting the lead.

After Laguna Seca, Rebellion had to rethink its budget, to make more funds available for the 2014 P1 chassis it commissioned for its WEC team. The team’s full-season ALMS schedule was cut back to single event, Petit Le Mans.

Despite not racing in North America for several months when Rebellion came to Road Atlanta the car was fast off the trailer. Rebellion’s Lola-Toyota, driven by Neel Jani, Nicolas Prost and Nick Heidfeld, was quicker then the Muscle Milk HPD in every practice session and qualified on the pole.

The only situation where Rebellion was not quicker was in the rain—so when race day dawned rainy, the team knew it had a battle on its hands.

The race got off to a bad start for Rebellion. The team had to pit after six laps to switch to slicks, losing the lead. Driver Neel Jani retook the lead when Klaus Graf in the Muscle Milk car pitted a few laps later.

Jani kept the loead until lap 47, when he pitted for fresh tires. As he left the pits, he ran over the #52 PR1-Mathieson PC Oreca; Jani simply didn’t see the slower car.

This not only caused minor damage to the Rebellion Lola, it earned the stop and stop-plus-sixty-second penalty. When Jani rejoined the race, he was a lap down in 15th position.

If the track had been dry, Rebellion could have counted on superior speed to whittle away Muscle Milk’s lead. With rain falling intermittently, Rebellion had to rely on pit stop strategy, and here Muscle Milk was Rebellion’s equal.

After four-and-a-half hours of racing, Rebellion still trailed by a lap. It looked like Muscle Milk might win the last ALMS Petit Le Mans and Lucas Luhr might get his fiftieth ALMS win.

After five hours of racing, the picture looked much different.

Minutes before the halfway point Romain Dumas brought the Muscle Milk car into the pits with a bad misfire. According to team owner Greg Pickett, this might have been caused by overheating tripping a sensor, which the team would reset. Unfortunately, the crew never found the cause of the overheating, and eight minutes later, the car was officially retired.

This left Rebellion with no real competition except the weather, and shortly after Muscle Milk retired, the weather cleared up.

Rebellion’s three drivers kept lapping at their regular pace; they didn’t slow down and coast home. At 9:07 p.m. after nine hours and 43 minutes of racing, the Rebellion Lola completed its 394th lap, covering 1000 miles around the 2.54-mile Road Atlanta circuit and winning the race.

Still to come: The interviews, and driver and team championship winners