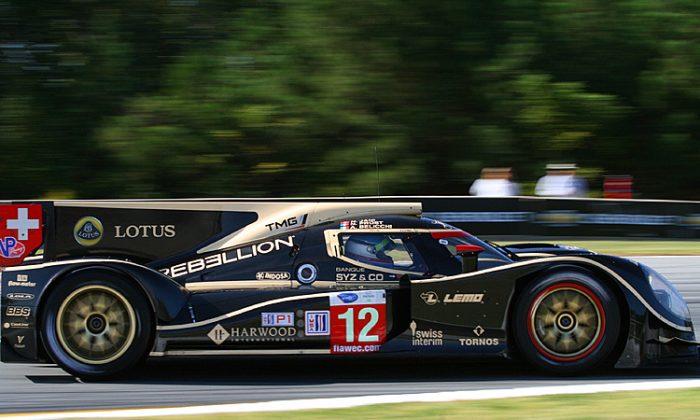 Rebellion Racing has already won the World Endurance Championship P1-Privateer trophy, and plucked the second-brightest jewel form the American Le mans Series crown with an overall win at Petit Le Mans, but the Swiss team is not slowing down.

Neel Jani and Nicolas Prost were the fastest privateers in the second free practice for the World Endurance Championship’s final round in Shanghai, lapping within half a second of the slowest factory car.

The team is hoping for a podium finish to cap their successful 2012 season.

“We will be competing at the 6 Hours of Shanghai with no pressure as we have achieved all our targets for this season,” said team manager Bart Hayden in a press release. “Our determination will remain high to achieve a strong result here in Shanghai to close off our fantastic season.

“Our cars and crew are as well prepared as ever. So, targeting a podium finish in Shanghai is not an unreachable objective.”

The two Rebellion Lolas placed fourth and seventh in second free practice, with the #12 of Nicolas Prost and Neel Jani only two seconds off the pace of the Toyota TS 030 and .only .483 behind the third-placed Audi. This made the #12 car the quickest privateer by .987 seconds over the #22 JRM HPD-Honda.

The #13 Rebellion has added a new driver for the Shanghai round: CongFu Cheng has joined Andrea Bellichi and Harold Primat. Cheng finished on the P2 podium at Le Mans in 2008, and has raced A1GP, F3, and DTM. He was chosen to co-drive with Mika Hakkinen in a Mercedes SLS in the 2011 ILMC Shanghai round. Shanghai will be Cheng’s first foray into LMP1.

“I am really looking forward to my home race with Rebellion Racing,” Cheng said in a press statement. “I really appreciate the chance that Rebellion Racing is giving me. I have got some friends in Rebellion Racing already, especially I am good friends with Neel Jani and know Nico Prost from my time in A1 GP.

“I was the first Chinese driver that raced and finished on the podium at Le Mans 24 Hours (in LMP2 class in 2008). Obviously jumping into an LMP1 car and racing together with some of the great drivers will be challenging, but I am confident with myself of being able to perform well in Shanghai.

“Surely, we will get very good media interest and coverage given the quality of the team and me as a Chinese driver in my home country race.”

Rebellion has had excellent pace and reliability all season long. If anything should befall one of the factory Audis or Toyota, Rebellion will be right there to seize that podium position

The Six Hours of Shanghai is the last race of the season; don’t miss it. Free practice 3 will start at 9:15 p.m. EDT Friday, qualifying at 1:25 a.m. Saturday, and the race takes the green flag at 11 p.m. on Saturday, Oct. 27. Live timing and video streaming (for qualifying and the race) can be found at the WEC website.