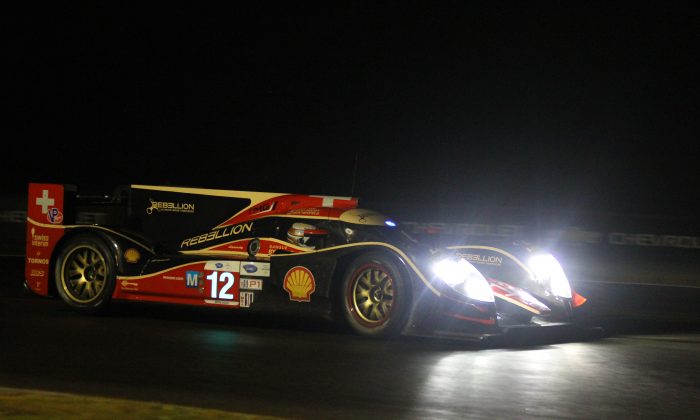 BRASELTON, Ga.—The rain let up the cars sped up.

As the track dried, lap times fell, but not very quickly. Not many teams were interested in pushing the limits on a damp track, in the dark. Most teams packed up after the first hour, having done the requisite laps; after a long, wet day, everyone was tired, and any data gathered would be worthless for trying to set up for Friday afternoon’s qualifying sessions.

Only 2012 WINNERS Rebellion Racing thought differently. With all the other teams packing up, Rebellion saw the empty track as the perfect place to test the conditions which might well pertain in the closing hours of Saturday’s race.

Neel Jani went out on the empty track with instruction from the team to go for a fast lap but to be careful—with all the rubber washed off and a lot of gravel dragged onto the track by spinning cars, conditions could be tricky.

Jani eventually turned a lap of 1:20.360, 2.5 seconds quicker that the best of Muscle Milk’s Klaus Graf. Muscle Milk Pickett Racing ran eleven laps. Rebellion ran thirty-three. Once Neel Jani was certain that the set-up worked in the cool, damp conditions, he handed off to Nick Heidfeld, who was new to the track.

Heidfeld got some valuable night-time seat time, while the team tried communicating via pit board, in case the radios should fail on race day. This kind of preparation might pay off as Rebellion tries to defend its 2012 title.

Friday’s morning practice session is sure to be hectic. Teams will face a green track with unknown limits of adhesion, and that track will be changing constantly as it warms up and as rubber is laid down. Crews will need to scramble to find set-ups which will not only work well for qualifying, but also ofr the first sting of Saturday’s race.

ALMS practice starts t 11:20 a.m.—about the same time Petit Le Mans starts the next day, so teams will gain valuable data. However, there is a lot more scheduled for Frday: Mazda MX-5, IMSA Prototype Lites, and GT3 Cup Challenge all have their final races Friday, and the big K&N stock cars are scheduled to race Friday evening, after ALMS qualifying.

That means a lot of exciting action for fans at the track. It also means different series will be laying down different kinds of rubber all day long. The track will be different at 2 p.m. when qualifying starts, and different still for Saturday morning’s 25-minute warm-up.

Teams which guess right could have a sizeable edge in the first hours of Saturday’s ten-hour/1000-mile rae. But ten hours is a long time. Even teams which got the initial set-up wrong will have plenty of time to make up lost time later in the day.

Of course, teams which started the day with a perfect set-up might not adapt well to constantly changing track conditions, and the weather is always a variable.

For both the defending champions Rebellion Racing and repeat ALMS champs Muscle Milk Pickett Racing, this will be the last chance to contest Petit Le Mans for the foreseeable future. Tudor United Sports Car Championship takes over running the race in 2014, and the P1 class won’t be included.

Rebellion will be racing its new R-1 chassis in the World Endurance Championship; Muscle Milk hasn’t yet announced its 2014 plans, but it’s P1 HPD-ARX-03c won’t be eligible for USCC. Plus, these two teams never got the chance to settle between tem which was best—the Muscle Milk car collided with a GTC Porsche at pit-out early in the 2012 race and lost too much time in the pits.

The two titans have one last chance to compete in cars they have developed over years, on a track well suited to serious endurance racing. This could be a battle fans will be talking about ears from now.

Tickets are available through the Road Atlanta website or at the gate.